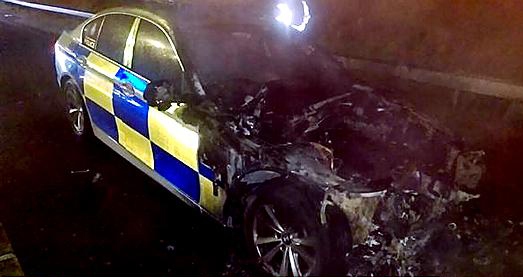 LUCKY escape . . . the officer managed to get out of this patrol car when it went up in flames

A POLICE officer escaped when his patrol car burst into flames on the M60 this morning.

The traffic officer, based in Chadderton, was on his way to an incident when the blaze took hold between the Oldham and Ashton junctions at around 6.30am. His BMW patrol car was destroyed by the fire and drivers faced long delays as three of the four lanes were closed between junction 22 at Oldham and junction 23 at Ashton. This was later reduced to one lane before the carriageway completely reopened shortly before 7.30am.

One of the officer’s colleagues said: “He managed to get it to the hard shoulder and got out, then it just burst into flames. He’s fine.”

A crew from Hollins Fire Station put out the blaze, beleved to have been caused by a mechanical misfunction.

Police later saw the funny side: a GMP tweet had a picture of th car with the message “One of our night team went to extreme measures to defrost the car.”