You are Here: Home » News » Commons sense from Jim 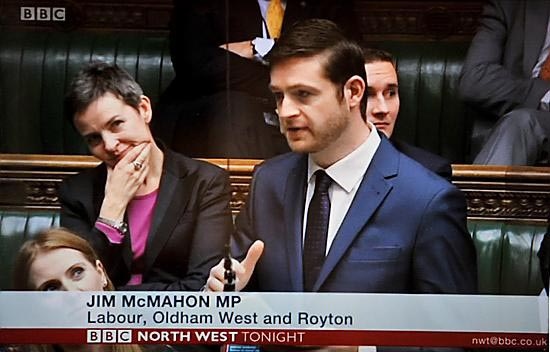 JIM McMahon yesterday told the House of Commons Oldham is “far from beaten” in a maiden speech that demanded a fair deal when devolution comes to Greater Manchester.

The new Oldham West and Royton MP officially spoke in Parliament for the first time and focused on urging the Government to make sure towns like Oldham are considered when money and power is devolved to the regionGreater Manchester. During his by-election campaign Mr McMahon promised he was standing for a better deal for Oldham.

Mr McMahon impressed MPs from all parties with a confident and passionate speech that challenged the Northern Powerhouse brand he has previously referred to as the “Northern Poorhouse”.

He said that while he strongly believes in devolution, he wants to see a settlement with genuine powers and resources being devolved. he says at present the local authorities being expected to handle the change are being starved of resources. He claims the current deal doesn’t empower communities.

“People are seeing vital services, their lifeline in some cases, taken away. For too many, work doesn’t pay and they just cannot make ends meet,” he said.

“You may see this as me painting a picture of Oldham being beaten. Mark my words, we are far from beaten. We have courage and we have determination. We are a town going from strength to strength, rebuilding, attracting investment and creating new jobs.

“We can be proud of what we’ve achieved in recent years but too often it feels like we do it alone. And it shouldn’t be that way. Devolution must be more than a love affair with the big cities. It must deliver and provide a decent settlement for towns and districts too.

“Without a clear national framework for devolution it is for the Chancellor himself to pick and choose who he deals with and what is offered. Without genuinely reforming central government and addressing fair funding, the Northern Powerhouse brand is meaningless.”

Mr McMahon also said that just as the national north-south divide, there is a Greater Manchester north-south economic split.

Mr McMahon also took the opportunity during the debate on public transport costs to call for cross-borough Metrolink expansion.

“We must push for cross-borough expansion and I will use this opportunity to push for the Ashton loop from Ashton town centre to Oldham Mumps and a Middleton spur from Westwood through Middleton and on to the Bury line,” he said.

This would cut out massive current over-travel delays: people going between those points by tram must first go into central Manchester

Mr McMahon opened his speech by paying tribute to his predecessor, the late Michael Meacher who served Oldham as an MP for 45 years before he died last year. MPs from all parties publicly congratulated him on making a big first impression.