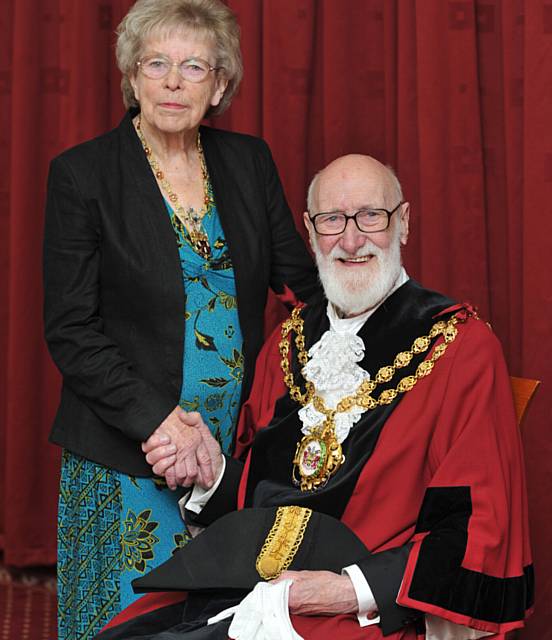 STALWART councillor Derek Heffernan said he wants to be known as the “Mayor of Peace”, as he was officially sworn into office today.

A councillor in Saddleworth North for almost 30 years, the new mayor of Oldham is well-respected across the borough.

Councillor Heffernan has lived in Saddleworth for 42 years and in November, 2015, he was appointed as Oldham’s first “Champion of Peace”.

Well-known for his fundraising efforts, principally for Macmillan Cancer Support, he is a retired civil servant and is married, to his wife Di, with children and grandchildren.

In a speech, delivered to the Oldham Council chamber today, Councillor Heffernan said: “Thank you for entrusting the reputation of this metropolitan borough to Di and I for the coming year.

“Oldham: we love the place and we love the people. The people are known as the most generous in Greater Manchester for giving to charity and that is a fact which endears them to both of us.

“We will work for this council and for Oldham.

“We will visit as many places and people as possible and spread the word of the best of our borough of Oldham and obviously Saddleworth.

“I would like to be known as the ‘Mayor of Peace’ for this great borough. Oldham Council was the first local authority in the UK to sign the European Pledge to Peace.

“Wherever I visit I will take that message with me. You put Oldham at the forefront and we need to stay there. We will join other cities and nations seeking to create a ‘culture of peace’ in Europe.

“Our children will carry the torch forward and so I will work with schools to engage pupils and staff to spread our message ­— peace is possible.

“Sadly, our borough is one of the worst areas for ill health. This year we will concentrate on mental health, principally the help available for veterans returning from conflict, our prisons are full of ex-military personnel; oral health particularly in children, the number having baby teeth extracted is horrific; and thirdly we will encourage people to have health checks which can lead to earlier diagnosis of problems.”

As his chosen charities as mayor, Councillor Heffernan will support Macmillan Cancer Support, Francis House and the final third will be divided among local charities.

Councillor Heffernan added: “Obviously the Mayor of Oldham Appeal will be a big part of our agenda. Di and I have a history of fundraising stretching back some 66 years. We could not miss this opportunity.”

Councillor Heffernan replaces Ateeque Ur-Rehman, who alongside his wife Yasmin Toor ­— the retiring mayoress ­— has cherished the role throughout the last year.

Speaking to the Evening Chronicle after being re-elected as councillor for Medlock Vale earlier this month, Councillor Ur-Rehman said: “I have really enjoyed being mayor and I will certainly miss it.

“It has been an honour.”

The deputy mayor, and next year’s mayor of Oldham, is Labour St Mary’s councillor Shadab Qumer.