You are Here: Home » News » Fans’ tribute to the life of tragic Ernie

Fans’ tribute to the life of tragic Ernie 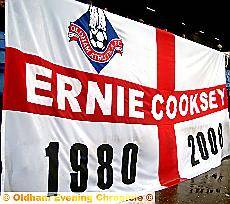 THE Ernie flag will be displayed at home and abroad.

LATICS fans are keeping alive the memory of Ernie Cooksey with a special flag which is going on tour around England . . . and the world.

The Ernie flag will be displayed at every Athletic home and away game this season and also at England internationals abroad.

A group of supporters felt Ernie should be honoured after his tragic death at the age of 28, but their mission will also raise awareness of the cancer which killed him.

The flag’s presence at Rochdale tonight will be especially poignant as Ernie played for both clubs. The game is being preceded by a minute’s applause, while players from Athletic and Rochdale will wear Ernie t-shirts.

Mr Doran said: “We were all moved by what happened to Ernie and felt it was important to make people aware of his plight.

“There will be a lot of emotion at the Rochdale game, but afterwards there isn’t much opportunity to publicise what happened.

“Ernie had such enthusiasm and commitment, and by taking the flag to every game it will become a talking point.

“We can then explain who he was, how he died and try to raise awareness of Christie Hospital and the Factor 50 campaign (which helps people suffering from skin cancer).

“A few of us took the flag to Ernie’s funeral and his family were impressed with it. They were taking pictures.

“We’ve set up a website which seems to be going down well and we’re hoping to get some flyers printed for people who see the flag and are particularly interested.”

There was a huge fundraising effort when it was announced that the popular Ernie, who left Athletic in 2004, was battling malignant melanoma.

He was hoping to have treatment in America but died early last month. Within a week of his funeral, partner Louise gave birth to their first child, Isobella.

To show support for the campaign, to make a donation and for more details, see www.ernieflag.co.uk