You are Here: Home » News » Wilson states his case for the defence

Wilson states his case for the defence 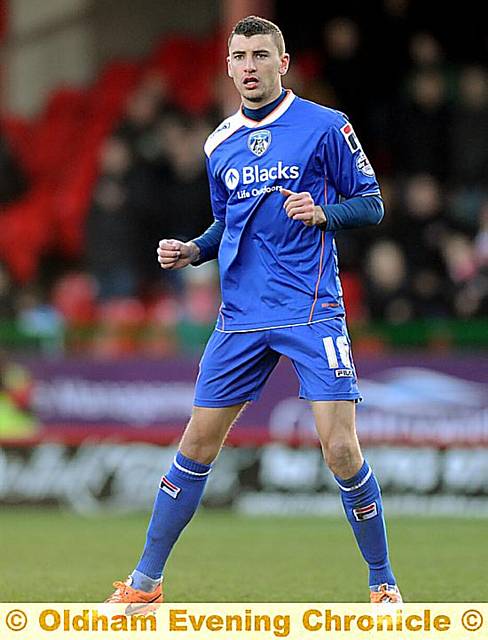 LEE Johnson’s Athletic side have never been as solid in 2013-14 as when James Wilson starts alongside Adam Lockwood in the middle of defence.

With that pairing deployed, Athletic on average concede less than a goal a game.

Seven goals let in and three clean sheets recorded in eight League One fixtures — five of which have been against teams currently in the top half — indicates how well this new partnership is functioning.

Wilson’s pace in sweeping out signs of danger was on show numerous times as Athletic gained a deserved draw at Leyton Orient.

And Lockwood’s ability to lead and win the first ball ties in so well with his partner’s qualities that the duo out-perform any others Johnson has selected this season . . . including those featuring James Tarkowski.

“Me and Locky came in at the same time and there were a couple of games where I was ill, but apart from that we have stayed there,” said former Bristol City man Wilson (25), who made his debut alongside Lockwood in the 1-0 win at Swindon last month.

“He’s always talking to me through the games and I need someone like that alongside me, so it has been perfect.

“In the last few games the team shape has been good, which has helped us as defenders as well.

“We have gone from there and enjoyed the last week or so, definitely.

“The lads are comfortable in the shape we are playing and we also look stronger breaking on teams.”

Athletic’s revival could not have been more timely. From the doom and gloom that followed a 2-0 home loss to Rotherham — who tanked Brentford 3-0 at home on Tuesday — Wilson has been an essential part of a side which has taken five points from the last three fixtures.

Some may argue that tomorrow’s test against Tarkowski and Co. is something of a ‘bonus’ game for Athletic and that the real crunch clashes are to come against sides in and around Athletic in the Sky Bet League One standings.

Wilson, who said he “enjoyed” his two loan spells at Griffin Park four years ago, partly accepts that, but sees no reason why the team can’t upset the odds to pick up three points against the Bees.

“Any side in this division can beat any other on their day,” added Wilson, a full Wales international who was on the stand-by list for the friendly against Iceland in Cardiff last month.

“We are definitely strong enough to beat Brentford if we play well.

“We then have a lot of games against sides in and around us coming up and they are very important for us.”

As for his future beyond the expiry of the short-term deal which runs to the end of this term, Wilson is open to offers.

“I have got no contract here or anywhere else, so I am just waiting to see what the manager thinks and go from there,” said the Chepstow-born defender.

“I’m enjoying it here and they are a great bunch of lads, so why not?”