You are Here: Home » News » Useless, toothless... we should pull out

Useless, toothless... we should pull out 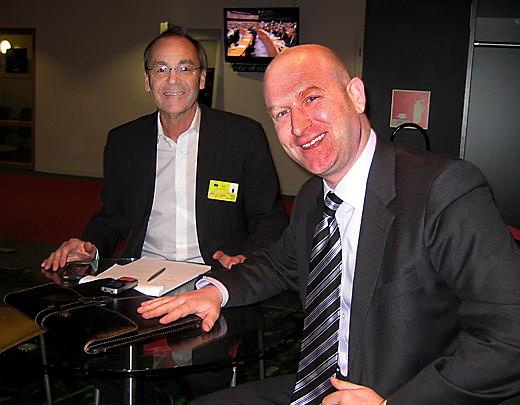 Everything about the European Parliament in Strasbourg is big — the building, the number of MEPs (758), the budget, the bureaucracy. Chronicle reporter Martyn Torr spent two days there, meeting two North-West representatives with polar opposite views of the 27-country EU. Here is his concluding report

REGULAR readers of the Chronicle letters page will feel as if they already know Paul Nuttall though, to the best of my knowledge, the deputy leader of UKIP is not a regular visitor to Oldham.

He did contest the January, 2010, Saddleworth and East Oldham by-election won by Debbie Abrahams, polling 5.8 per cent of the vote and the party retained its deposit —which was seen a “result” by the group.

The former history professor is a relentless writer of letters and supplies a never-ending stream of comment on all things European.

Having spent an hour in the company of this amiable, hugely entertaining and likeable Scouser — yep, he’s from Bootle — I can tell you he speaks as fast as he types.

We met in the press bar at Strasbourg, where, like all his MEP colleagues, he spends four days each calendar month. Not the press bar, I meant the European Parliament...

He will tell you, often and then some more, that he doesn’t agree with the European ideal, institution, movement, call it what you will, but if he doesn’t turn up and vote in at least 50 per cent of the sessions he doesn’t get paid. And neither do his staff.

That’s democracy at work, I guess.

But turn up, he does, and there were 12 MEPs in his group and 10 support staff around the place and our interview cut into a time when he should have been at a group meeting where decisions were being taken on what they were going to vote for, against or abstain in that evening’s session.

“Obviously we will vote against most of the resolutions,” he declared without a hint of sarcasm or scepticism.

UKIP remain implacably opposed to the European ideal and that’s fact, although he insists that the party is no longer a single-issue pressure group.

“We have policies. A report by Lord Ashcroft proved that — the majority of people, when asked, put immigration and crime above Europe when asked for their views on what UKIP stands for,” he said with a certainty that brooked no argument

That’s the way he is. He is a formidable communicator as you would expect from a man with a background in education.

Nuttall has a degree in history and politics and lectured in history at Liverpool Hope University until he won a seat at the European Parliament in 2009, topping the UKIP North-West list.

Alongside a fellow UKIP MEP, he was famously branded the “laziest and least value-for- money MEP”, ranking 736th out of 756 MEPs with respect to attendance.

Nuttall and his party defended the record with their party opposing the UK membership of the EU stating on his website: “I have no interest sitting all day in Brussels committees enacting job-killing, democracy-destroying legislation inspired by the EU.”

This then is the guy I was talking to. In Strasbourg. In the parliament building.

Opinions? He’s full of them... “The chamber is never full unless there’s a vote and if people don’t vote they don’t get paid.

“Take a look on You Tube. In one debate I spoke directly to the camera and said ‘It’s 4.30 on a Tuesday afternoon and I’m telling you all there are only 26 people in the chamber’.

“I did that because the camera focusses on one person at a time so no one knows there is no one there.

He reminded me that, in 1998, UKIP decided to win seats and attend “basically act as the eyes and ears of the country”.

“My mandate in 2009 was clear — I said I wouldn’t sit on committees and attend meetings because it’s all smoke and mirrors. The real decisions are made by the Commission, by people who meet in secret.

“The Parliament exists to allow MEPs to justify their own existence, to give the whole thing an air of democracy. Yet there is no democracy.

“I spend my time in the UK attending meetings and spreading the message which I think is more important.

“I earn a lot less money than other MEPs because I’m not coming here and to Brussels every day to sign my name. And I’m not claiming my 280 euros a day on top of my basic salary.

“If I had my way we would come out and have a free trade agreement and then let Britain kick on.

“I’ve had this debate with Chris Davies. He’s sold on the ideal, but the euro is in crisis and it’s the slowest growing economic block in the world so why are we tying ourselves to it?”