Oldham pubs gear up for another bumper World Cup night 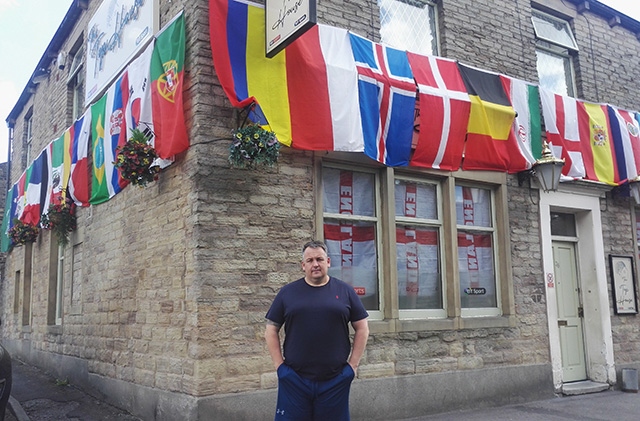 Mark Howard outside his flag-draped Top House pub in Lees

Football fever has certainly gripped Oldham and its pub-goers, who are all gearing up excitedly for tonight’s England World Cup semi-final clash against Croatia in Russia.

Many of Oldham’s pubs have enjoyed a surge in business in recent weeks as Gareth Southgate’s talented team have made routine progress through to the last four of the biggest tournament in global sport.

The hot weather has also helped business, but tonight (Wednesday) pubs across town will be hammered once again as England bid to reach the World Cup final for the first time since they won the competition for the only time way back in 1966.

Mark Howard is the football-mad landlord at the Top House in Springhead.

Mark told the Chronicle: “It’s a big game for the boys tonight, and hopefully they’ll do the business.

“Here at the pub we’ve got free food on for all the punters, and £2 per pint offers for during the game.

“We’ve got eight big TVs and two big screens, and we’ve even got a TV out in the back for the sun-catchers.

“It’s going to be a great atmosphere in here again, with lots of good people.”

Dave Mowbray runs the Colliers Arms on Old Lane in Chadderton, and has done for the past 15 years.

He said: “We’ve been in the pub since 6am this morning trying to get the pub ready.

“We’re having an outside screen in the beer garden area tonight – and hopefully for the final on Sunday – where there’s seating for over 100 people.

“There’s music on from around 3pm until just before kick-off, and then hopefully we’ll carry on celebrating after the match.

“We do try and encourage a family atmosphere here, so we want to get the mums, dads and kids in after school. It’s a nice, safe family environment for people to come to at the Colliers.

“Despite the CO2 shortage and some other pubs running out of beer, we’ve broke all records this year. This good run in the World Cup has helped us immensely.

Manageress Carrie Shaw took over at the Carters Arms at just the right time it would seem – two months ago.

The Oldham Road pub will be packed tonight.

Carrie said: “The turnout for the last few games has been really good.

“The whole football atmosphere has been incredible.”

England to beat Croatia on penalties is currently the most backed ‘method of victory’, according to Betfair.

If the match is to be won in 90 minutes, punters are predicting a 2-1 victory for England, while 65% of bets will be on England to win.

Mark Howard tells us what's on at the Top House in Lees tonight - and he's gives us his big match score prediction.