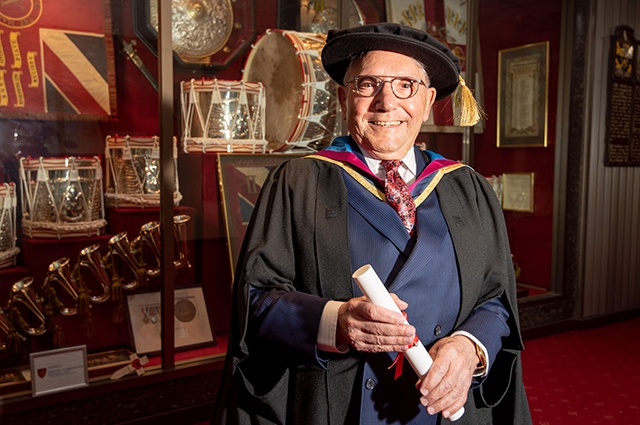 Sir Norman Stoller pictured at the Civic Centre this morning

Hugely popular Oldham philanthropist Sir Norman Stoller was back in his home town today (Friday) to receive an Honorary Fellowship from Governors at the Oldham College and University Campus Oldham.

The award, handed out at the College's graduation ceremony, is offered on an annual basis to individuals who exemplify the College's commitment to community, vocational excellence and the development of Oldham in general.

Sir Norman's nomination was in recognition of the outstanding contribution he continually makes to creating opportunities for young people and adults in Oldham, and for his enduring commitment to the regeneration of the town.

The award ceremony took place at the Queen Elizabeth Hall.

Sir Norman, who is now aged 84, is clearly still fiercely proud of his home town and the progress it continues to make.

Ahead of the presentation ceremony, he told the Chronicle: "I think its very important that those who graduate recognise that what they've actually received is a vehicle.

"That vehicle needs fuel to make it work though, and the strongest fuel that they can use is their own entrepreneurial spirit.

"It's that spirit that open the doors of opportunity, so this kind of ceremony offers a wonderful boost notjust to the students, but to Oldham in general.

"The town can take great pride in seeing how its students are advancing because education leads to jobs, leads to careers, and of course leads to success.

"This has been a process that's been going on for many years now.

"Oldham used to have lousy schools, lousy teachers, and of course disenchanted children.

"We have wonderful schools here, fantastic teachers, and there's enterprise in the town.

"We're talking the who nine yards - it's not just one single thing. 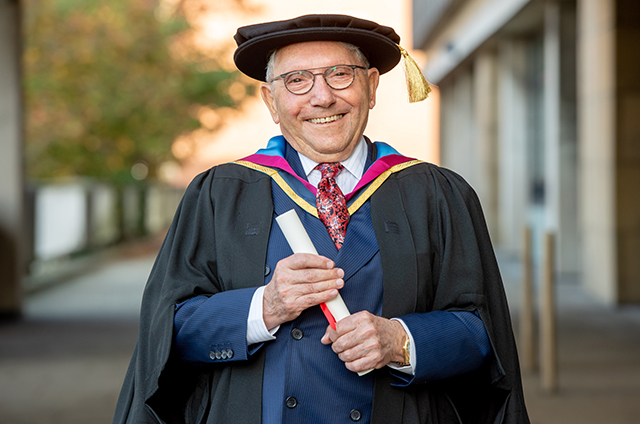 Before his retirement, Sir Norman ran Oldham firm Seton Healthcare, which was founded by his father Ivor, inventor of the tubular bandage.

After serving in the RAF, Norman started working for the company for £5 a week and commission — and eventually built it into a worldwide brand and one of Oldham’s biggest employers.

He created the Norman Stoller Charitable Trust in the early 1980s, and has since given millions to good causes.

He has also twice been diagnosed with cancer, which has led to the trust supporting two world-leading cancer research centres at Manchester University and the Christie Hospital, and the creation of two new Maggie’s cancer support centres in Oldham and Manchester.

Sir Norman now lives in the Lake District with his wife, Sheila.

His other honours include serving as High Sheriff of Greater Manchester in 1999-2000 and being made an Honorary Freeman of Oldham in 2008.