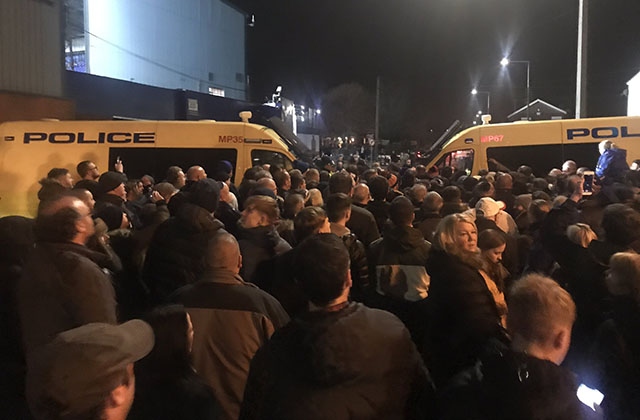 The scene outside Prenton Park on Saturday evening. Picture courtesy of Ross Coyne on Twitter

Five people were arrested after Tranmere's home game against Oldham Athletic on Saturday - but police have now said the situation could have been much worse.

Merseyside Police said officers were tipped off about "planned serious disorder following the game", which was prevented.

Two Wirral teenagers were arrested, as well as three men from Middleton and Oldham.

A spokesman for the Merseyside force said earlier: "Merseyside Police can confirm that we have made a number of arrests and are investigating following the Tranmere Rovers versus Oldham Athletic match at Prenton Park on Saturday, November 24."

Athletic also shared a statement this morning saying it had been made aware of "a number of incidents involving supporters leaving Prenton Park" after Saturday's game.

A statement published on the club's website this morning said: "This is something the club are taking very seriously and we hope provide an update in due course.

"We would like to take this opportunity to thank those supporters who behaved impeccably at Prenton Park."

However, Match Commander, Chief Superintendent Dave Charnock, has now said: “Our policing of any football match puts the safety of supporters first, which can involve a number of tactics.

"In this case, we were responding appropriately to information about planned serious disorder following the game, and which was prevented.

“Our message to the small minority of fans intent on planning or carrying out violence or disorder at any match is that this type of behaviour in unacceptable and will simply not be tolerated.

"We can and do identify those responsible for such incidents and will issue sanctions including Banning Orders."

Mr Charnock added: “It would have been alarming to those supporters to have been caught up in the events of Saturday and I want to reassure them that we only ever use such tactics for their protection and safety.

"I would ask anyone with information to come forward and we will take appropriate action.”

The full list of people arrested as part of trouble around the match is as follows:

A 17-year-old boy from Rock Ferry, Wirral was arrested on suspicion of Section 5 public order and has been released under investigation pending further enquiries.

A 17-year-old boy from Thornton Hough, Wirral was arrested on suspicion of possession of cannabis and obstructing police and was released under investigation pending further enquiries.

A 19-year-old man from Middleton was arrested for drunk and disorderly and issued with a penalty notice.

A 45-year-old man from Middleton was arrested for drunk and disorderly and issued with a penalty notice.

A 26-year-old man from Oldham was arrested for a public order offence issued with a penalty notice.

Anyone with information is asked to contact @MerPolCC, call 101 or @CrimestoppersUK anonymously on 0800 555 111.