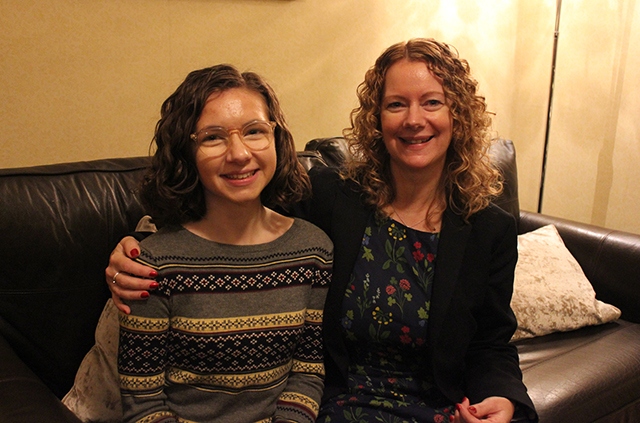 Molly Howarth is pictured with her mum Jane

Former Crompton House School pupil Molly Howarth has been delighted to help promote a revolutionary new cancer treatment in the UK because when she needed proton beam therapy, it was only available in Florida.

Molly, who lives in Rochdale, was diagnosed in 2016, when she became ill during her English GCSE exam.

An MRI scan at the Royal Oldham Hospital revealed an ependyoma brain tumour.

It was the most serious – grade 3 – so as well as having it removed in an eight-hour operation at Royal Manchester Children’s Hospital, she also needed radiotherapy for the cancer, but a specialist kind – proton beam - which was not yet available in the UK.

This month The Christie Hospital in Manchester opened its own proton beam therapy treatment and Molly was interviewed on ITV about her experience.

The NHS paid for Molly to be treated at Jacksonville in Florida.

While abroad, with parents Richard and Jane and older sister Alice, she received her GCSE results – an outstanding seven A*s and four As.

In November 2016 she was given the all-clear and in May this year her check-ups were reduced to every six months.

Molly, aged 18, said: “They scan my brain and my spine and I am in the scanner for about 90 minutes.

"It is very lonely and you are in a very enclosed space.”

This month she had her regular scan and her consultant reported that it was the ‘best yet’.

Since the age of three Molly has been a dancer and particularly enjoys ballet.

For the last four years she has had lessons at Dansworks Dance Academy of Performing Arts in Bacup.

She was due to take her Intermediate Ballet exam when she started being ill and it was cancelled when she got diagnosed.

When she returned to dancing she found the operation had left her with balance difficulties and extreme tiredness and weakness.

She said: “At first I could only have a 15 minute lesson.

"I had lost a lot of weight with being ill and was not physically able to do it.

“It was hard at first, but I told my mum I wanted to be back dancing even though it was hard.

"It is really good physiotherapy.”

Her determination paid off and now she is back to weekly hour-long lessons.

Mum Jane said: “I think Molly has made it easier for us because she has been so positive.

“She is a really determined person and having to go back and start from scratch with her dancing must have been hard.

Molly added: “I am currently in my last year at Rochdale Sixth Form College and will be taking my A levels in May and plan to go to York University to study Psychology.

“As a result of the treatment, I had to take a year out. It was very isolating being on my own at home.

“I want to be a clinical psychologist and I want to work with children who have had cancer treatment and help them with the psychological effects.

"I want to use my experience to help others.”

She was also been named Rochdale’s Young Person of the Year, was able to finally get her provisional driving licence and begin lessons, celebrated her 18th birthday and spent four days sailing in Largs with the Ellen MacArthur Cancer Trust.