You are Here: Home » News » Main News » Holly and Olivia's epic ‘Everest’ climb is all for the love of a treasured friend 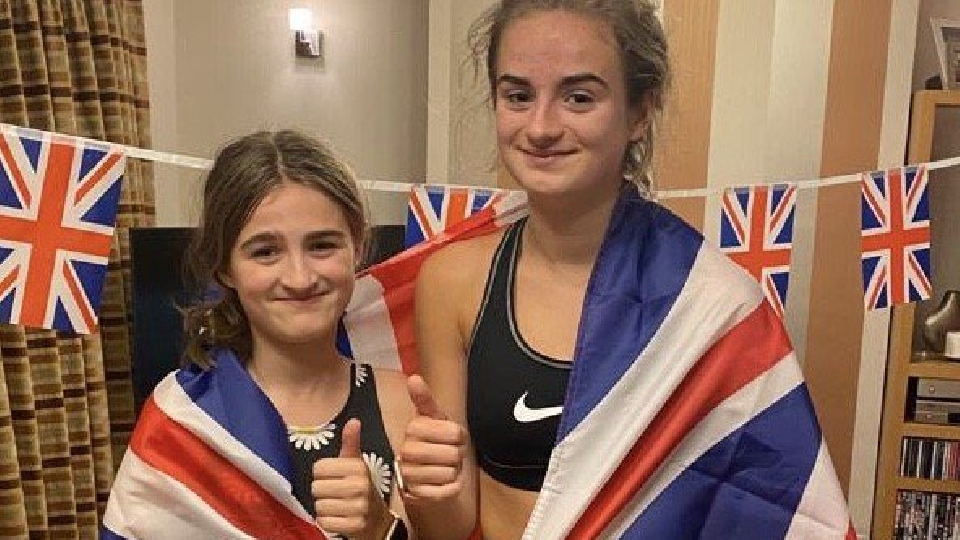 A big thumbs-up from Holly and Olivia

Courageous 11-year-old Holly Nolan has proved she would scale any height to support her treasured school friend.

So with her family’s help, the dedicated Oldham Hulme Grammar School pupil set out to ‘climb’ the world’s highest mountain, Mount Everest, on a unique mercy mission fundraiser.

And Holly, a member of Sale Harriers, North West Pentathlon Hub and Glossop Swimming Club, succeeded in her gruelling endeavour by climbing the mountain’s equivalent height up the stairs of her three-storey Stalybridge home... all 8,848m of it!

In all, she and her sister Olivia, aged 15, who supported her challenge, climbed up both flights of stairs 1,702 times.

Proud mum Johanna explained: “Originally, Holly and Olivia were going to do the climb over three days.

She was first diagnosed in November 2016 and finished treatment in April, 2019.

After being off treatment for just over a year she relapsed and is now undergoing chemotherapy once again at the Royal Manchester Children's Hospital, Ward 84.

But learning Freya was ill again, Holly wanted to help her and together with her father, Ged, dreamed up the idea to summit Everest.

Freya's mum Emma said: “I wanted to raise money for Ward 84 because the care provided to Freya by the staff and doctors on the ward meant the world to her and her family.

“We were totally gobsmacked when we heard about Holly’s idea to raise money for Ward 84.

“Her enthusiasm and stamina throughout the challenge was amazing.

"I can’t imagine how hard it must have been, for her and her sister Olivia, but they carried on regardless and smashed it.”

The girls' actual climb was extremely difficult and required a huge amount of will power and determination to complete.

It started off as fun, playing loud music and dancing, but became more difficult as the day wore on.

The girls took regular breaks, ate heartily and aided by plenty of sweets, snacks and water, climbed to the summit of Everest, passing through each of the ‘camps’ on the famous mountain in just over a day.

As they did it on their stairs, they had to descend each time they climbed one flight, making the journey even more difficult.

Their mum added: "I don't know how they managed to stay awake all through the night.

"It must have been adrenaline that kept them going.

“They also had huge of support from family, friends and running colleagues and coaches.

"Both Holly and Olivia were very pleased to finish and have a well-earned rest.

"We are very proud of their achievement."