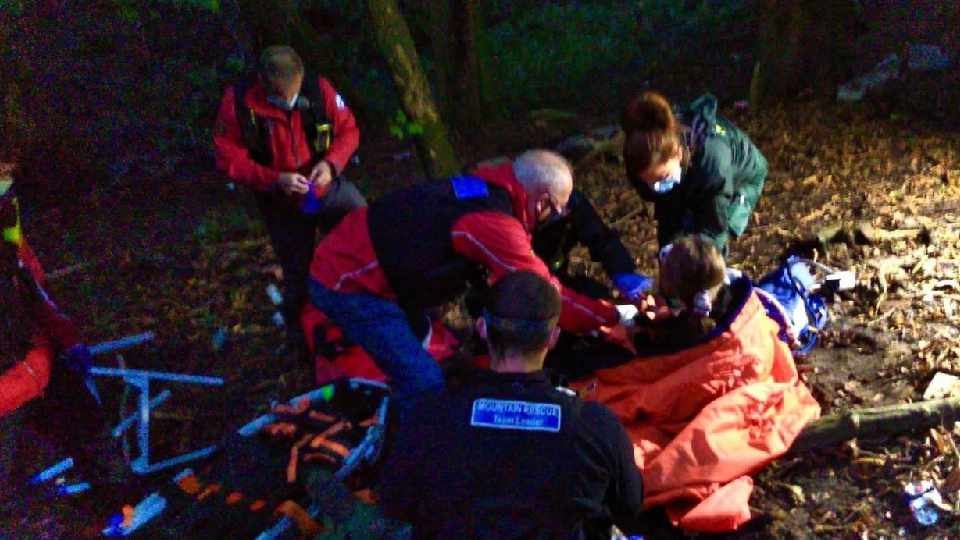 Masked OMR and NHS teams work on rescuing the girl

The rescue of a 12-year-old girl who survived a horrific fall revealed a remarkable story behind the stretcher that saved her.

The luckless girl fell from a rope swing in a wooded area of Glodwick on Thursday evening, breaking both her arms and gashing her knee.

Initially, she was cared for by a North West Ambulance Service crew, but they needed Oldham Mountain Rescue Team’s specialist equipment to extract her from a steep, greasy location.

The 17-strong team of mountain rescue champions came to her aid with a remarkable stretcher, the brainchild of long-time team members David Allport and Doctor Andrew Taylor.

They developed the Alphin stretcher, a lightweight folding unit which can be carried solo for abseil or moorland rescues and with a compact shape making it easy to winch into a helicopter.

And although the stretcher was designed in 1982, Dr Taylor was one of four mountain rescuers and two NHS paramedics administering treatment by floodlight to the casualty - working with ten colleagues at the top of the hill.

Once the child was splinted, and pain killers given, she was wrapped in a fibre pile blanket and placed on the stretcher, which was carried up the slope by six MR Team members, but with a rope from the top to the stretcher which both hauled and provided safety against slipping.

“Dave Allport dreamed of a lighter, folding unit that one person could carry, as splitting the older versions caused problems of poor strength and missing halves," he said.

“I  had an intense interest in engineering, all the tools and a father, Jack, who was an aircraft designer whose calculations converted the Manchester airframe into the Lancaster Bomber.

"We got busy cutting, welding, testing and improving.

“With the system, the time to evacuation from arriving at a crag top was reduced from 40-plus minutes to 11 on the first trial run.

“The stretcher has seen minor improvements over 40 years and remains the primary evacuation tool of OMRT.”

Originally sold through Troll Safety Equipment of Uppermill, the stretcher is now made and marketed by David Allport’s company, SAR Products.

MRT personnel were involved for just over one hour and 30 minutes at this latest incident.