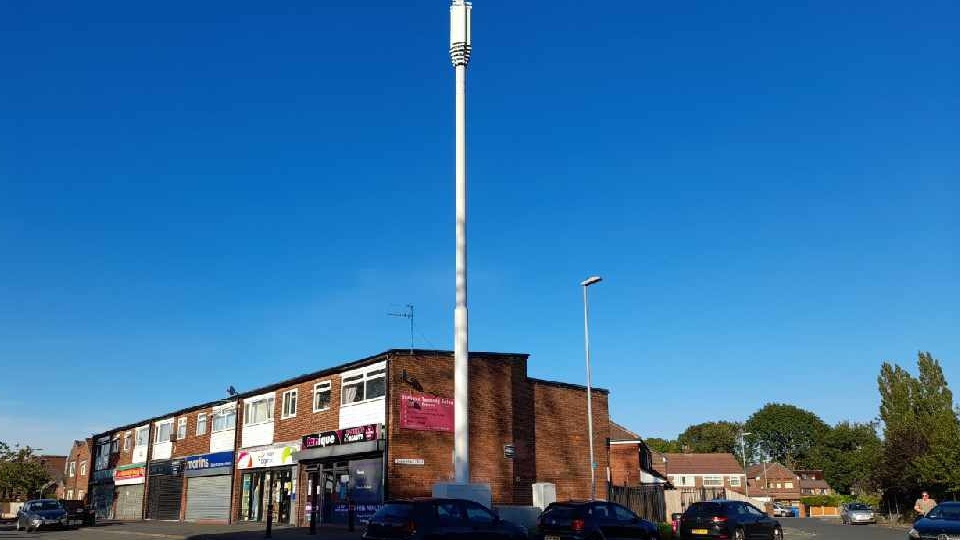 The huge mast on Lord Lane in Failsworth

'Terrified' residents and 'devastated' business owners close to a newly-erected 5G mast on Lord Lane in Failsworth have a sympathetic ear from the leader of Oldham Council, who lives close to the giant structure.

However, recent changes in planning laws mean local residents were denied a say when an initial application to erect the mast was submitted.

A local resident told us: "The 5G mast in the middle of the shops on Lord Lane is higher than Failsworth Pole.

"The owners of the businesses are devastated, and the older residents are terrified as its facing an even bigger electrical pylon.

"Oldham Council agreed to this and told no-one.

"It has caused outrage and it's disgusting how they think its acceptable to put this monstrosity in the middle of our community shops."

However, Oldham councillor Sean Fielding has responded to the concerns, and moved to explain the Council's position following the recent planning rule changes.

Mr Fielding said: "I’ve had a number of people contact me about the new mast on Lord Lane in Failsworth.

"It’s not far from my own home and I agree that it is not an attractive structure.

"The Failsworth West Councillors were concerned about this when the application came in and tried to move the decision to the Planning Committee so residents’ voices could’ve been heard.

"The request for this to be considered by Planning Committee was therefore refused.

"This is another example of where the Tory Government are taking power and control away from local people on planning matters in order to help their big business and developer friends.

"Whilst consideration by Planning Committee might still have delivered the same outcome, it would have provided an opportunity for meaningful engagement with local people and reassurance on the safety of these masts, which I know is a concern.

"The whole prior approval process that has allowed this mast to go through with relatively little awareness among the local community has made things appear underhand, despite the process being followed to the letter.

"It’s a recipe for mistrust and doesn’t make for good community relations.

"My colleagues and I will continue to campaign for the planning powers of local councils to be retained and enhanced in order to keep control in the hands of local people and their representatives."

The regulations regarding phone masts were relaxed earlier this year.

Taller mobile phone masts are now allowed without full planning permission as part of efforts to boost 5G coverage across the country.

New base stations and upgrades to existing masts are also permitted without approval from councils, to speed up roll-out of fast mobile internet.