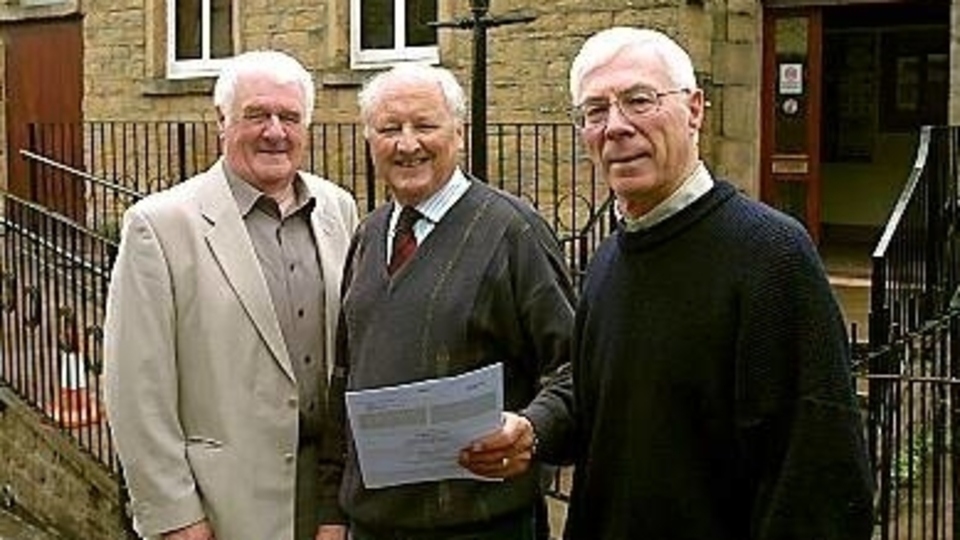 Colin Smith is pictured (left) outside the Millgate Arts Centre in Delph in 2011 during the time he was Chair of Trustees. Then stage director Ken Wright and treasurer David Shipp are also on the picture

Mr Smith, who had a distinguished local government career spanning 43 years, was praised for his “drive and initiative.”

“He was the lead Chief Executive of the Association of Greater Manchester Authorities (AGMA) for about eight years in the 1990s.

“After he retired his organisational and financial skills were much sought after.

"He was appointed to the Boards of the Halle Orchestra, Oldham Coliseum and Dr Kershaw’s Hospice.

“I found him extremely personable, professional and dynamic in his approach to major developments in the borough.

“Without his drive and initiative it is unlikely we would have been able to build Oldham Sixth Form College and the Spindles Shopping Centre.

“He led a dedicated team of Chief Officers at Oldham.

"His drive enthusiasm and attention to detail will long be remembered by those councillors and officers who had the privilege of working with him.

“He was awarded the OBE for his outstanding service to local government in Oldham and Greater Manchester.

“His leisure time was spent watching Burnley FC and enjoying family holidays with his wife Marian and his twin boys Andrew and Richard.”

“Colin was well known locally having served Oldham MBC as Chief Executive for 16 years before retiring in 1999.

“Above all, Colin was a proud family man being a loving and caring husband, father, father in law and grandfather and a very close and supportive friend - he will be greatly missed."

Oldham Coliseum Chief Executive Susan Wildman said: “We are extremely sorry to hear of the loss of Colin Smith.

"He was a superb Chair of the Board, extremely well respected for his knowledge and wisdom and held in great affection for his empathy, kindness and humour.

"Beyond his retirement from the Board he remained a passionate supporter of the Coliseum and of our work.

"We will miss seeing him at our shows and send our love and condolences to Marian and to all his family and friends.

"We count ourselves as friends and we will miss him greatly.”

Oldham Council Leader, Sean Fielding, said: “I am saddened to hear of the passing of Colin Smith.

“Although I didn’t know Colin personally, his hard work and dedication during his time working for Oldham Council is still evident today.

“I know I join many others in passing my condolences onto Colin’s family and friends for their sad loss.”