You are Here: Home » News » Main News » What really goes on inside an Oldham rapid coronavirus testing centre

What really goes on inside an Oldham rapid coronavirus testing centre 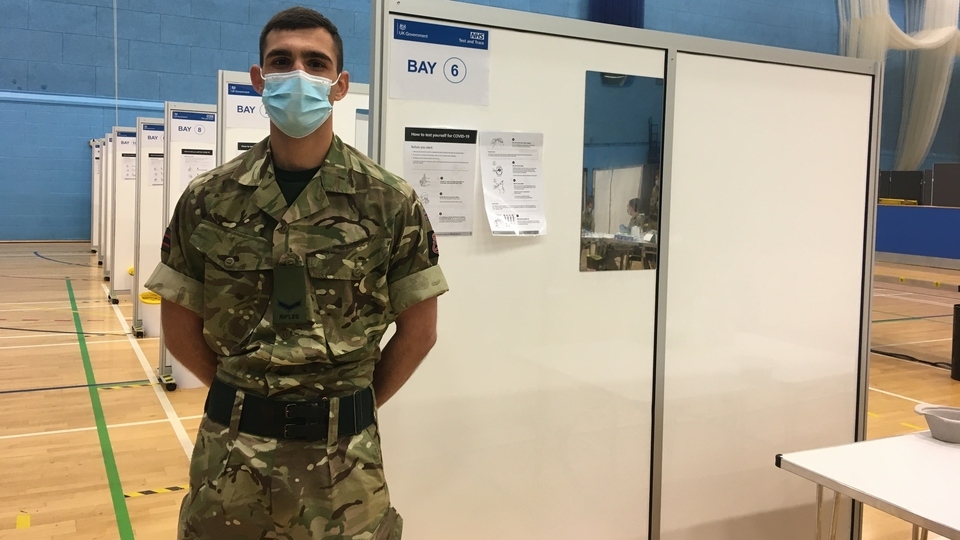 A year ago I would not have expected to have been standing in front of a masked uniformed soldier while he mixed a vial containing some of my saliva.

But this is 2021, and rapid coronavirus testing for people without symptoms is set to become a normal part of life in Oldham.

The council and British army have teamed up to roll out four new testing sites which will offer lateral flow tests to residents who cannot work from home, similar to the mass testing programme which began in Liverpool in November.

Whether you’re a delivery driver, supermarket worker, builder or nursery assistant you’ll be able to turn up without needing to book and take a test which can return a result in just 30 minutes.

The sites, which opened on Monday this week, are spread geographically across the borough at Shaw Lifelong Learning Centre, Failsworth Town Hall, Oldham Community Leisure centre, and Uppermill Civic Hall.

Oldham town centre was quiet when I got off the tram at Union Street to visit the OCL centre on Rochdale Road on Thursday afternoon.

Signs around the building directed me in through a door which led directly into the main sports hall, normally used for activities such as badminton, workouts, and even line dancing.

As a journalist, a job which is designated as a key worker role by the government and cannot solely be done from home, I took the opportunity to have a test myself.

Peter Pawson, who leads the rapid testing programme for Oldham council, tells me that the aim is to have people taking a test at least every seven days.

“What that does is detect people who don’t know they have the virus.

"And by doing that we break the chain of transmission.

“We’ve seen an uptake in people who want to stay safe, want to be able to come here, check they don’t have a virus and make sure they’re not potentially spreading that to their workmates or friends or family.”

They have already written to more than 5,000 businesses in the borough with details of the sites and encouraging them to get their staff to access the rapid tests.

And so far he explains they are doing around 500 tests each day across the four different locations.

There is certainly the capacity for it. When I arrive at the leisure centre, mask on, I can see a long row of booths spanning the width of the sports hall, each set up with their own testing station.

I’m greeted by a member of Oldham council staff who gets me to sanitise my hands, then takes my temperature with an infrared thermometer.

My temperature is normal and I’m allowed to proceed to a desk, where two soldiers sit behind a perspex screen.

I give my name, date of birth and phone number to one who enters the details into the government website via a tablet.

He explains I should get my result within the hour, and gives me a phone number on my registration card to ring if it doesn’t arrive in that time.

I’m also handed an information card on lateral flow tests which states that ‘the test can sometimes miss a positive case so you could still have the virus’. 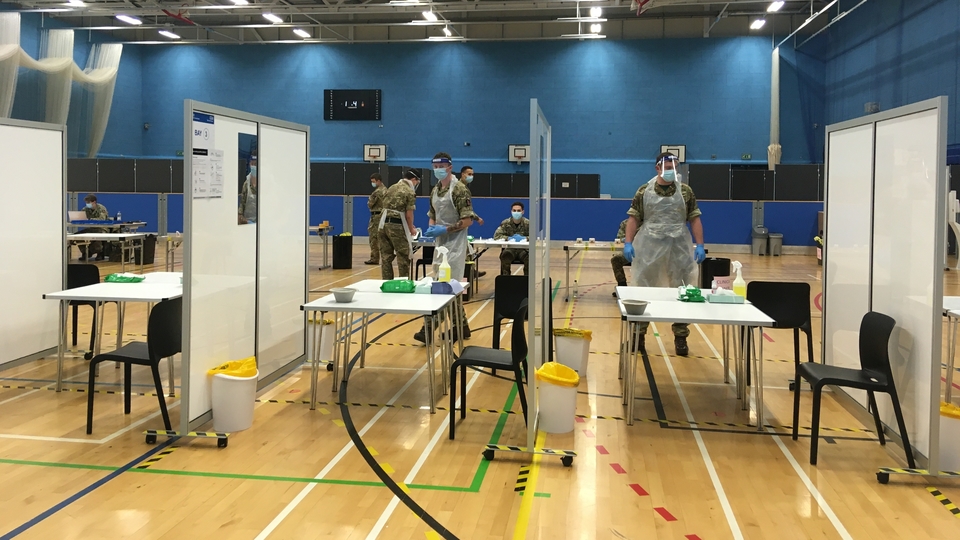 Bosses stress that under the right conditions, the lateral flow tests are a useful tool in detecting the most highly infectious, symptomless cases.

But people are urged to continue to maintain social distancing, hand washing and following other coronavirus guidance even if they get a negative result.

Corporal Andrew Hedges is one of the soldiers who has been drafted in to process the lateral flow tests at the Oldham site.

He explains that in the rare case of a ‘void’ result, someone would normally be contacted and asked to retake the test.

“We have really good results where we’ve been working here, we’ve only had one void and it works really well, especially if you do it well to a high standard,” the 26-year-old says.

“I do have a medical background which does help but I haven’t done anything with the army like this so this is a new thing for me.

“But it’s good to do something new, and we’re all loving it, helping out the community and getting hands on.”

Next I’m directed into a booth where a soldier wearing full PPE – mask, gloves, visor and gown – gets me to sanitise my hands again, then hands me a swab and explains I need to rub it on each tonsil for around ten seconds, and then the same again up each nostril.

They have installed mirrors on the side of the booths to help locate these elusive tonsils, and avoid touching your tongue.

Having taken a PCR (symptomatic) test before, which gets processed in a laboratory, it isn’t my first rodeo but the test is still slightly uncomfortable and leaves my eyes watering and wanting to sneeze.

I hand the swab back to the soldier, who immediately mixes it in a vial containing a liquid for around ten second before discarding it.

He gives me a handful of antibacterial wipes to clean my side of the table while he does the same on his end and then I sanitise my hands a final time, and get directed towards a different exit.

The whole process takes around three minutes to complete and aside from a bit of mild discomfort (although they do have a sick bowl ready, just in case) was quick and painless.

While the work of the army has been vital in getting these testing centres set up, in the near future chiefs want to move to a model where they can operate them on their own, staffed by local residents

Asked to rate the work of the soldiers, Mr Pawson says they ‘couldn’t ask for more’.

“They’ve been really good. The army is going to support us at least for the next six weeks but what we want to do is transition it to a locally supported operating model,” he adds.

“In this we want employment opportunities for Oldham residents, those roles we’re recruiting for very soon.”

As I’m waiting for my tram I get a text from the NHS with my test result, and I’m relieved to see it’s negative.