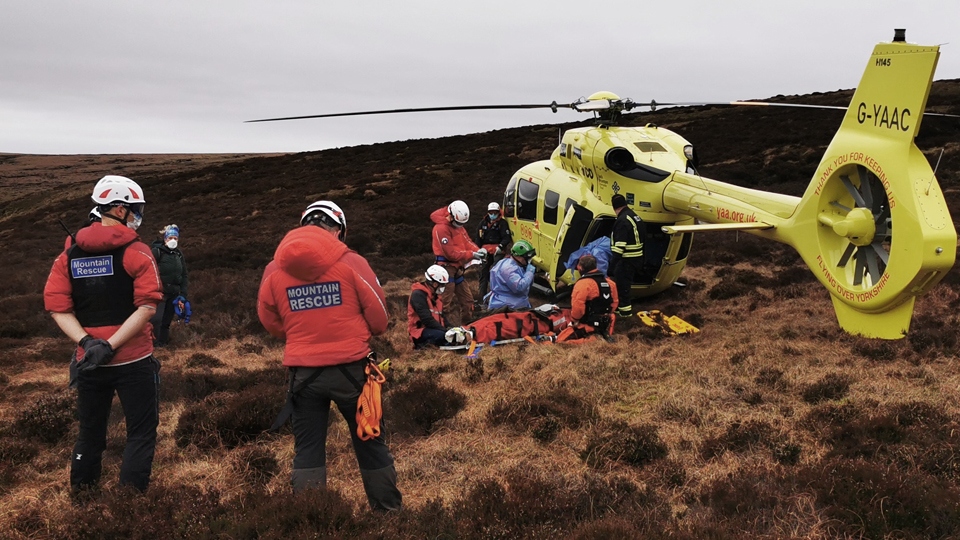 The man was flown to Sheffield

A multi-agency rescue operation swung into action after a man fell from a spectacular monolith on the wind-hammered hills above Saddleworth.

An 18-strong squad from Oldham Mountain Rescue Team were contacted by North West Ambulance Service who received reports of the man falling from the Trinnicle on Ravenstones, near Dovestones.

The Trinnicle is a soaring, isolated skyscraper of stone – fractured from the main ice-sculpted cliff and part of an  impressive series of sheer, eye-catching rock formations.

Due to the potential for serious injuries following a fall from height, Yorkshire Air Ambulance were also requested, and NWAS ground crews.

YAA, who were first on scene, quickly assessed the casualty as being in a very serious condition.

Because of the steep terrain and extremely blustery wind conditions, assistance from the Maritime & Coastguard Agency was requested, with the larger helicopter and winching capability flew from Humberside.

Said OMRT leader Rob Tortoishell: “By this time, OMRT members were arriving on scene with our specialist medical equipment and assisted in the treatment of the casualty while preparing for helicopter winching and landing sites.

"Some excellent flying by MCA R912 from Humberside meant the winch man could be landed at the scene. The decision was made to lift the casualty in our stretcher onto the top of the crag.

"He was then transferred to YAA for onward transport to Sheffield’s Northern General Hospital where he could receive the medical care required.

"Our team members escorted the passers-by who had alerted the emergency services and administered immediate first aid back down to the car park.

"We then returned to base to clean and sort the equipment."

The leader added: “We would urge people to take extra care when walking near steep ground and crag tops, especially when it is very windy. And we send our positive thoughts to the casualty and his family.”

OMRT personnel were involved for two hours and 50 minutes.