You are Here: Home » News » Main News » Councillor sparks controversy after branding opponents of plans for a new school ‘NIMBYs’ 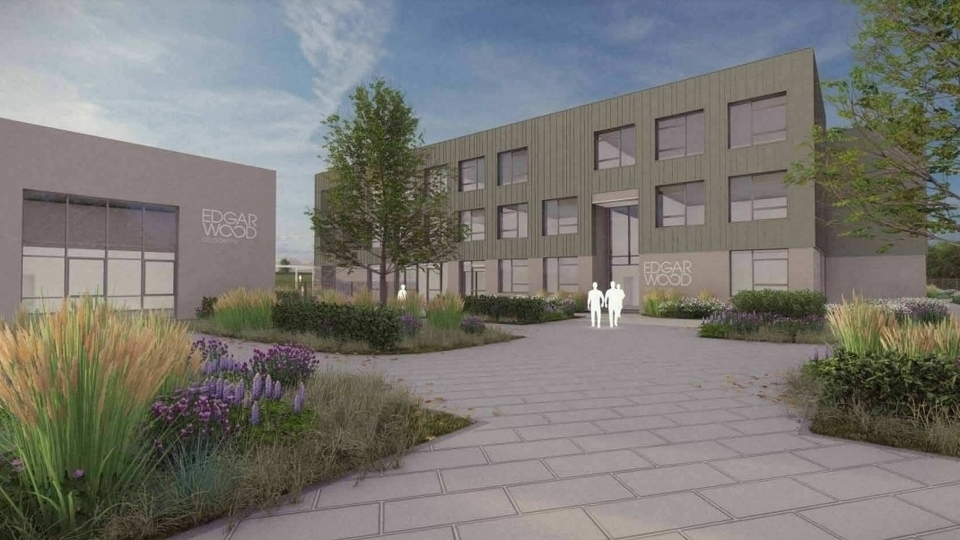 A CGI of the proposed Edgar Wood Academy in Middleton

A councillor sparked controversy after branding opponents of plans for a new school ‘NIMBYs’.

The ‘outrageous’ remark was made by Coun Faisal Rana at a meeting of Rochdale council’s planning committee, where full planning permission was granted for a 900-place secondary school in Middleton.

Dubbed the Edgar Wood Academy, it will be built on land off Heywood Old Road, between Birch and Bowlee.

‘Outline planning permission’ – which established the principle of developing the land and plans for a new access road – had already been approved by the committee in October.

However – as at that earlier meeting – there was angry public opposition to the scheme when councillors met on Thursday night to decide on full planning permission.

Furious objectors Jillian Grisdale and Colin O’Neill said the council had ignored their concerns over wildlife and traffic, and used ‘underhand tactics’ to thwart their opposition to the scheme.

Ms Grisdale said officers’ presentation to councillors was ‘a total farce’ and the authority had done nothing more than ‘pay lip service’ to the public consultation.

However, Coun Rana accused objectors of being NIMBYs – an acronym meaning ‘not in my back yard’.

He said: “The issue I see is that ‘yes we want the school but not in my backyard’.

“But if everyone keeps saying that we will not have a school anywhere.

“I’m quite confident with the discussion we have heard from the highways officers.

"They have looked at everything and I’m sure they have done their homework and everything will be right with regards to the traffic.

“A similar example I can give, for instance,  we are thinking of having a university at Hopwood Hall [College] maybe in the future.

“If people start objecting to that [and saying] ‘no we don’t want it here Manchester Road is only small, there will be so much traffic here as well’, we will not have anything in Rochdale.”

A furious Ms Grisdale said his comments were ‘outrageous’ before apparently having her mic switched off.

Prior to Coun Rana’s comments, Ms Grisdale said she had planned to present pictures of wildlife – including a family of deer – at the application site, but the council had ‘moved the goalposts’ at the last minute and would not allow it.

The Wrigley Fold resident also claimed  an earlier presentation by council officers was a ‘total farce’ and that the decision was a ‘fait accompli’.

She added that greenery had already been removed from the site by contractors that had ‘decimated’ the site.

“I think the standard method of operation of Rochdale council is to ignore local residents,” she added.

The school will have 91 staff parking spaces and will also be served by 19 drop-off/visitor spaces and two drop-off/delivery lay-bys.

Pupils will be encouraged to walk and cycle to school and parents urged not to drop them off by car unless absolutely necessary.

There will be 96 covered cycle spaces for pupils and staff, as well as improved cycling and walking access.

But fellow objector Colin O’Neill told the committee that congestion and road-safety issues were inevitable if the plans went ahead.

“You’re living in cloud cuckoo land if you think this school and the amount of traffic is going to be restricted by saying to parents ‘you should think about driving your kids to school’.

“You’re not listening to us.

"We’re residents, we live with this on a daily basis.

"You should think clearly what it is you are about to do – your [traffic] survey is flawed and your calculation for drainage is flawed.”

Access matters were dealt with at the previous meeting under ‘outline planning’ permission, but some councillors, including Coun Shah Wazir did sympathise and raise the issues during the debate.

Coun Peter Winkler – the only councillor on the committee to vote against granting outline planning permission – said it was ‘unfair’ to accuse residents with valid concerns of being NIMBYs.

“I do think there has been some very, very poor consultation with residents about this,” he said.

“Whether that is because we have been in a Covid pandemic or – dare I say – we are hiding behind that, frankly, whatever we have done the residents don’t feel they have been consulted with.

He added: “It does concern me. Have we done a good enough job of consulting with those people in a very small village, which is a heritage area that has a lot of issues that impact directly on those people?

“I appreciate we are serving the wider community but those people are going to live with that school day in and day out.”

Councillors were told that greenery had been removed from the site to stop birds nesting there before work began and to secure the area.

They were also told that while the traffic survey did date  to 2013, this had been adjusted to take into account a 20pc growth in traffic and the impact of the new housing developments that have been built or approved since then.

All members of the committee voted in favour of granting full planning permission for the school, bar Coun Winkler, who said he remained unconvinced it was being built in the right location.

Coun Irene Davidson asked for it to be noted that she did not agree with Coun Rana’s claim that Mr O’Neil and Ms Grisdale were NIMBYs.