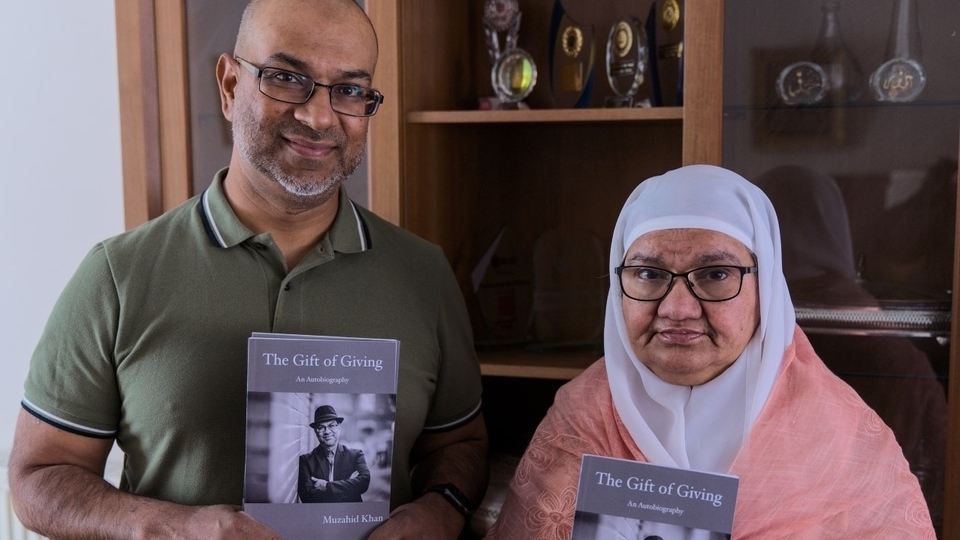 Muzahid Khan is pictured with his mother, Somirun Nessa Khan

An entrepreneur who swapped life in a Bangladeshi village surrounded by paddy fields for a daily dose of division and bricks through the windows in 1980s Oldham, has now seen Britain become a place where he is able to thrive – and “give back”.

In his first book, “The Gift of Giving”, Muzahid Khan charts a life filled with the strife of civil war in Asia, a huge readjustment in living conditions when his family came to Oldham and settled on Mars Street, a year-long fight against depression and now the joy of working in a diverse community.

This has enabled him to raise family, and his charitable work has seen him return to Bangladesh to help build a health clinic in the village of Sylhet.

“Much has been written and said about the Windrush generation and their stoicism and heroism in the face of prejudice and institutional racism as they worked to establish better lives for themselves in Britain,” said Muzahid.

“There are similarities with my story.

"I remember the sheer excitement of coming to Britain, the sudden awareness that my background was different and the gradual realisation that in beating my demons, I should create a ladder for others to climb and achieve.”

Muzahid has never lost his faith and family values during a journey that has seen him become a highly influential mentor to businesses across the North West, a charity champion, and a leading figure within the community of Oldham.

Giving is the central theme of the tome, and Muzahid added: “I totally believe that if I give, whatever that may be - whether it's a smile, whether it's a pound, whether it's a million pounds, or whether it is organising something - I absolutely believe, without any shadow of doubt, that by giving I would receive in a miraculous way.”

In that spirit, he is donating all of the proceeds of his book to Maggie’s cancer care in Oldham.

Muzahid’s motivation for writing the book is the hope it will become something of a coaching manual for others.

The 51-year-old said: “The reason I am reflecting on all of this is because, in my lifetime, I recognise that there is ample opportunity out there for me.

Presenter and former Dinnerladies and Coronation Street star Shobna Gulati is just one of the people Muz has befriended along the way.

She said: “Muz has long been my friend and mentor.

"This is an extraordinary journey written by a man who is generous to his very core.

"Have a gander and a read!”

National health campaigner and the founder of the Homeless-Friendly charity, Dr Zahid Chauhan OBE, added: “I would highly recommend the chapters on Muz’s charitable and entrepreneurial work.

"He is a credit to his community and his philanthropic endeavours are an absolute inspiration.”

A father-of-two and a senior player in entrepreneurial initiatives such as the Pathfinder Hub, Muzahid offered this reflection on Britain today and his hopes for the future.

He said: “The cultures of my children are very integrated now. British, Muslim, Bengali – all three in one - and I suppose, just like myself, they switch in and out of the ones that they need, at any time, as that time demands.

"I am guessing that’s the same case for most children growing up in the UK today - caught between three different things.

"If they can balance it right, they will be far richer as individuals and as people.

"If they lose one, then they have a real loss.”

Published by Shopno Sriti Media, “The Gift of Giving” is priced at £12.95 and is available from Amazon.