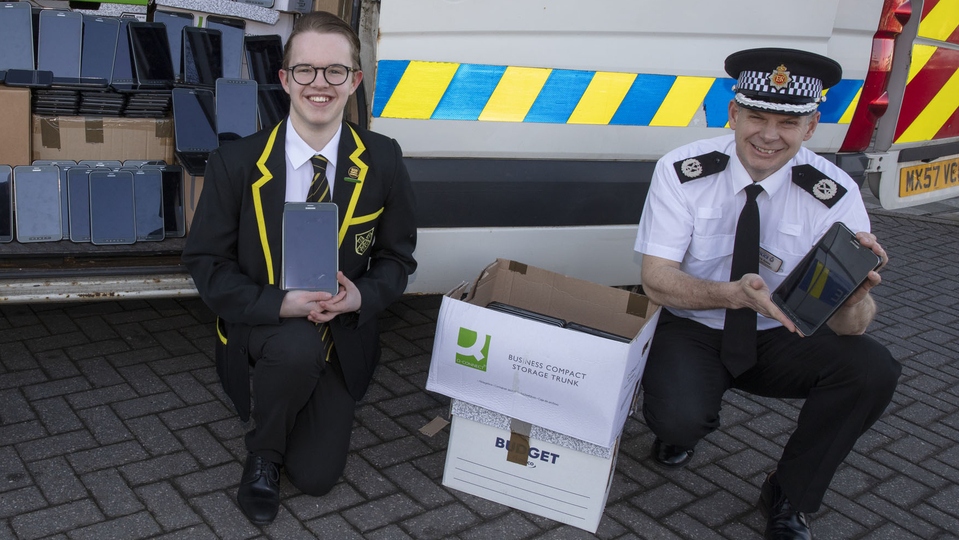 The generous donation has enabled the fund to support a total of 3,527 people and 132 schools and colleges since it launched

The Greater Manchester Tech Fund was launched at the start of the pandemic by the Mayor of Greater Manchester, Andy Burnham, to support digitally excluded young people with the technology and connectivity needed to continue their learning at home while schools and colleges remained closed.

The generous donation has enabled the fund to support a total of 3,527 people and 132 schools and colleges since it launched.

Recent ONS figures have showed that the issue of digital exclusion isn’t going away, with up to 1.2M Greater Manchester residents being digitally excluded in some way from the opportunities that the digital world offers.

The 2,400 tablets donated by GMP have now been distributed to primary schools and local device lending libraries across all local boroughs to support young learners, families, and communities to benefit from the opportunities digital access brings.

"We are aware of the struggles families have faced throughout the pandemic, especially those without technology to access remote learning, which is why we're so proud to support this positive initiative and help families in need."

The donations came after members of the Greater Manchester Youth Combined Authority became aware of the increasing digital divide across the city-region, with many young people having no access to the internet or having to share laptops amongst their whole family or access remote learning through their phone.

Joseph Eaton, Greater Manchester Youth Combined Authority member, said: “As a young person in education I have become more and more dependent on technology to get me through school and during lockdown young people have realised how technology contributes to their learning experience.

"In Greater Manchester, there are increasing numbers of young people that are being left behind because of their lack of technology.

"So that is why I cannot thank Greater Manchester Police enough for donating these tablets and providing valuable opportunities to the younger generation.

“Making this donation to the Greater Manchester Tech Fund, has provided an effective way to target the most digitally excluded young people and families in Greater Manchester, meaning that the tablets could quickly be distributed to those most in need.”

GMP’s donation marks the transition of the Greater Manchester Technology Fund, from an emergency response supporting young learners whilst education settings were closed, to a long-term support scheme to tackle the digital divide in communities across Greater Manchester.

Residents and businesses are now being asked to donate their old digital devices to be repurposed to support digitally excluded people locally.

Deputy Mayor for Policing and Crime, Beverley Hughes, said: “It’s great to see this donation from Greater Manchester Police is making a real impact within our local community, supporting families and communities to get online.

"The force’s donation will make a huge difference to young people across the city-region.

"Throughout the pandemic and beyond Greater Manchester has shown commitment to supporting young, vulnerable and isolated people, and we hope they will be able to continue to do by recycling their old devices to help ensure everybody has the opportunity to get online.”

Last week, the Mayor launched a new ambition to equip all under-25s, over-75s and disabled people with the skills, connectivity and technology to get online.

This new device donation appeal from the Greater Manchester Tech Fund is set to tackle one of the main barriers to digital inclusion, by providing residents with the technology needed to get online.

As part of this new ambition, the Mayor has established a Digital Inclusion Action Network to sit alongside the existing Greater Manchester Digital Inclusion Taskforce, enabling the Mayor to work in collaboration with businesses, local authorities, voluntary and charitable organisations to drive forward this ambition.

In January, GMCA teamed up with the Manchester Evening News to hold a Digital Donation Day to encourage businesses and individuals to support the Greater Manchester Tech Fund.