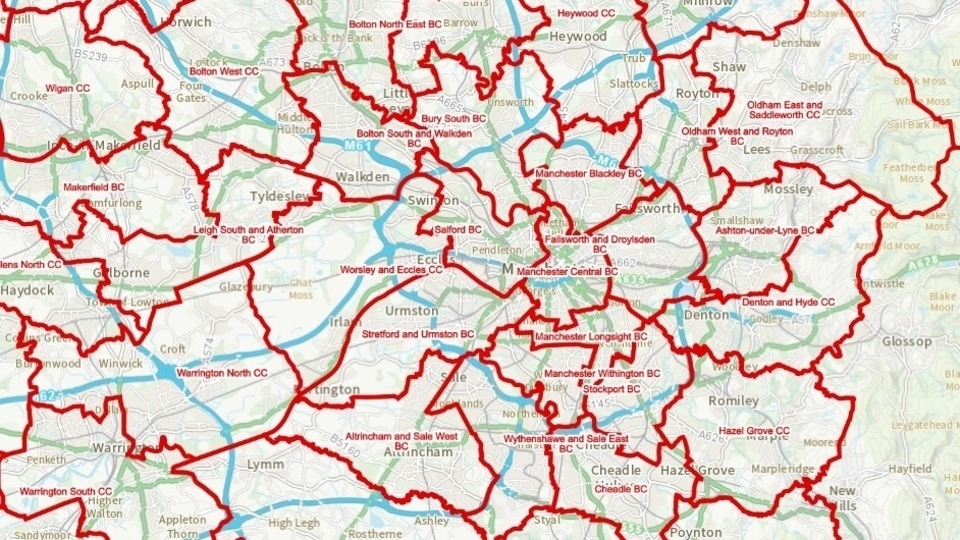 All off Greater Manchester’s parliamentary constituencies are proposed to be radically redrawn in the biggest electoral shake up for decades.

The Boundary Commission for England has published its draft recommendations for how the boundaries for MPs’ constituencies should look by the next general election.

While Greater Manchester is to retain its 27 members of parliament, the commission has put forward some radical changes which sees areas change or lose their current MP.

Large numbers of constituencies would also be rebranded and include extra neighbourhoods.

The blueprint also includes the creation of a new constituency that would span the boroughs of Manchester, Oldham and Tameside.

A consultation on the proposals will run for eight weeks until August 2.

Responses will be published early next year, followed by a second consultation and public hearings in each region.

The final report is expected in June 2023.

They are currently represented by Labour MPs Debbie Abrahams and Jim McMahon respectively.

However, the commission states that there is an alternative which it considers has ‘merit’.

“While our initial proposal is to retain the existing two constituencies unchanged, we would particularly welcome representations on this alternative.”

There would also be changes to the Ashton-under-Lyne ward, which covers wards in Failsworth.

The borough of Tameside has three MPs in parliament under the current system, representing Stalybridge and Hyde, Ashton, Droyslden and Failsworth, and Denton and Reddish.

However, under the proposed shake-up, Denton and Reddish would effectively vanish – losing the Reddish wards to Stockport.

And the Boundary Commission is proposing that the Stalybridge and Hyde constituency would no longer include Mossley, Stalybridge North and the Dukinfield Stalybridge ward.

Instead it would take on Denton North East, Denton West and Denton South wards, and ‘unites the communities of Denton and Hyde, whose urban areas almost adjoin’, being renamed Denton and Hyde constituency.

The Ashton-under-Lyne constituency does not include enough voters to be within the permitted range. Therefore the Commission is proposing to add in the wards of Mossley, Stalybridge North, Dukinfield Stalybridge and Dukinfield ward.

A new constituency would be created called the Failsworth and Droylsden constituency to take on these four wards.

It would also include the Clayton and Openshaw, and Gorton and Abbey Hey wards which are in Manchester.

The Miles Platting and Newton Heath ward would be divided between the new Failsworth and Droylsden constituency and the Manchester Central consituency.

Rochdale is represented by Tony Lloyd for Labour, while Heywood and Middleton is held by Conservative Chris Clarkson.

However, under the latest plans, the borough would gain an MP.

According to the Boundary Commission, the number of voters in both constituencies is ‘slightly over’ the permitted electorate range.

Consequently they are proposing a Rochdale constituency without the Spotland and Falinge ward, which would be included in a Heywood constituency.

The wards of South Middleton and East Middleton would move to be covered by the proposed Manchester Blackley constituency.

As the whole of Middleton would not be included in a single constituency, it is proposed to rename the re-jigged constituency Heywood.

These changes would result in the division of the town of Middleton which the Commission acknowledges is ‘not an ideal outcome’.

“However, we consider that the extensive disruption that would be caused by the alternatives we considered would not provide a better solution overall for this area,” it states.

Bolton West is largely unchanged under the Boundary Commission proposals, however they want to include the Hulton ward within the constituency.

This is because the Atherton ward is proposed to become part of a Wigan MP’s patch.

The Bolton North East constituency would also take on the Little Lever and Darcy Lever ward to the south east of Bolton, away from Bolton South.

Bolton South would instead take on the Salford wards of Walkden North, Walkden South, and Little Hulton, in order to bring it within the electorate range.

The Commission says that to ‘acknowledge the crossing’ between the two boroughs this constituency would be named Bolton South and Walkden.

At this moment in time, Bury is represented in Westminster by two MPs, James Daly for Bury North and Christian Wakeford for Bury South – both Conservatives.

However, the Boundary Commission says that the number of voters in the Bury North constituency is currently ‘under the permitted range’.

Therefore it is proposing to include the Radcliffe North ward within Bury North, removing it from Bury South.

To make up for the loss of Radcliffe North, the Bury South constituency will include the Salford area of Kersal and Broughton Park ward.

The draft proposals state: “Although this would be an orphan ward, it appears to have better physical links with the Sedgley area of Bury than the city of Salford itself.”

The largest borough in Greater Manchester in terms of population, Manchester also has the largest number of MPs – with five constituencies.

Currently all the representatives are Labour, with Mike Kane for Wythenshawe and Sale East, Afzal Khan for Gorton, Lucy Powell for Manchester Central, Jeff Smith for Withington and Graham Stringer for Blackley and Broughton.

However, the Boundary Commission are putting forward a shake up of a number of these existing constituencies, which would see an extra MP represent part of Manchester.

The Blackley and Broughton constituency would be significantly reconfigured, losing Broughton and all Salford wards, as well as the Cheetham ward in Manchester.

Renamed Manchester Blackley, it would include the Moston ward, as well as the South Middleton and East Middleton wards within the Rochdale borough.

The Manchester Central constituency would be reconfigured to include the Miles Platting area, to the west of the A6010 and would taken on the Cheetham ward.

However, it would not include the Clayton and Openshaw or Moston wards.

The Commission states: “We consider that not dividing the Miles Platting and Newton Heath ward would have significant negative knock-on effects across the eastern side of Greater Manchester, and would result in a set of constituencies that had less regard for the statutory factors and local ties.”

The Manchester Gorton constituency, as it no longer contains the Gorton and Abbey Hey council wards, would be renamed Manchester Longsight.

The proposed new Failsworth and Droylsden constituency would take on  the Clayton and Openshaw, and Gorton and Abbey Hey wards.

The Withington constituency would remain broadly unchanged, but would encompass slightly more of the Whalley Range area to ‘realign’ to new council wards.

Wythenshawe and Sale East will continue to span the boundaries of Trafford and Manchester, and remain ‘wholly unchanged’.

Salford is currently covered by three MPs, who represent the areas Worsley and Eccles South, Salford and Eccles, and Blackley and Broughton.

But under the new proposals, Broughton would now be included in the new ‘Salford’ constituency.

The Eccles, and Swinton and Wardley wards are now included within the proposed new Worsley and Eccles constituency, as is the Astley Mosley Common ward, which is in Wigan.

However, under the Boundary Commission proposals, the wards of Reddish North and Reddish South would now fall under the Stockport constituency.

The borough of Trafford is currently represented by three MPs – two Labour and one Conservative.

They are Graham Brady, Tory MP for Altrincham and Sale West, Kate Green, the Labour MP for Streford and Urmston and Michael Kane, Labour MP for Wythenshawe and Sale East.

Under the draft proposals Trafford would see no changes to its current constituencies.

Wigan is represented by four MPs in parliament, for the constituencies of Makerfield, Bolton West, Leigh and Wigan.

Since Leigh constituency contains too many voters, the Boundary Commission wants to see the Leigh West ward added to the Makerfield constituency, replacing the Ashton ward.

A new constituency – Leigh South and Atherton – would include the Atherton ward, taking it from the Bolton West constituency. It would also take on the Ashton ward.

However, the Wigan constituency would remain unchanged.

“We recognise that the inclusion of the West Leigh ward in a Makerfield constituency, and the Ashton ward in the Leigh South and Atherton constituency, means that the towns of both Leigh and Ashton-in-Makerfield are now divided between constituencies,” the Commission states.

“However, we consider that configurations of wards in this and the surrounding area mean that some division of communities is unavoidable.”

Wigan borough would continue to have four MPs, with the Astley Mosley Common ward represented by the Worsley and Eccles MP.

People can have their say on the proposals by visiting: www.bcereviews.org.uk