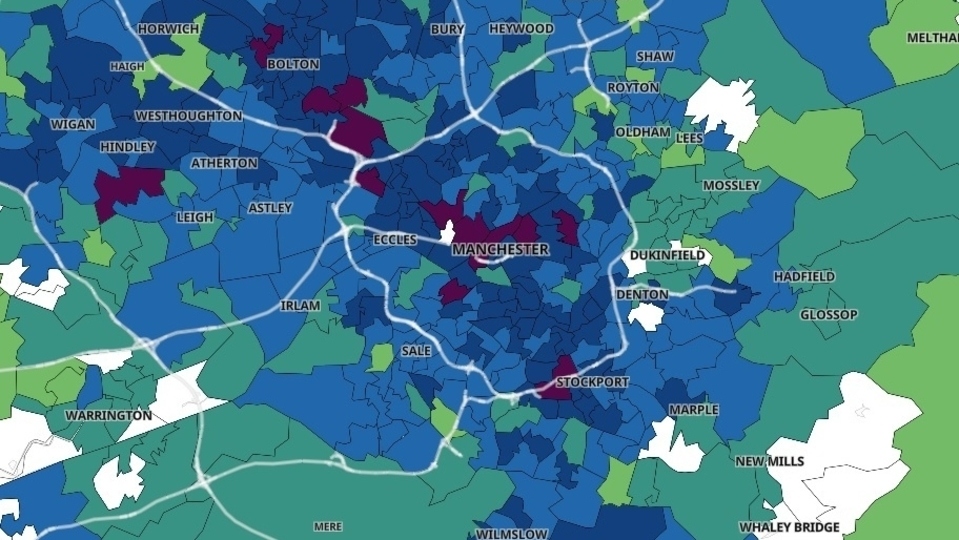 Greater Manchester Infections in the week to June 5

One Salford neighbourhood has become Greater Manchester’s biggest Covid-19 hotspot, as the latest data shows just five areas in the whole region could be free from the virus.

Infections are continuing to rise sharply across the ten boroughs as the new more infectious Delta variant of coronavirus spreads across the north west.

In the last week to June 6, cases doubled in three boroughs of Greater Manchester.

The three biggest virus hotspots are now in Salford, Bolton and Manchester.

The only areas where fewer than three cases have been recorded in the past seven day period were Pendleton in Salford, Guide Bridge, Denton South Dukinfield East and Hough Hill – all in Tameside, and New Delph, Dobcross and Austerlands in Oldham.

It comes amid calls from Mayor Andy Burnham and local health leaders for a huge surge in local vaccinations to try and get ahead of the rises following the region’s being designated as an ‘enhanced response area’ by the government on Tuesday.

However, the government has so far refused to commit to this.

These are the top ten hotspots in the region, according to the latest local data:

There have been 81 cases of Covid-19 in this area of Salford in the seven days to June 5.

This middle super output area covers the locality around Salford Crescent on the border with Manchester.

The 81 cases recorded is a huge increase on the previous week, where there were 51 incidences of hte virus.

Coming in at second, there have been 68 cases of Covid in this Bolton neighbourhood.

Just a few weeks ago, in the seven days to May 22 there had been fewer than three cases recorded.

But now there has been a rise of 32 cases in the past seven days, an 88.9pc increase.

The third biggest local hotspot in Greater Manchester, this Manchester neighbourhood has jumped by 33 to 55 cases in the week to June 5.

This is an increase from just five cases in the week to May 22.

This area of Stockport is the region’s fourth biggest hotspot, with 53 cases in the past seven day period.

Another Salford neighbourhood, this area – which includes Media City – saw 52 cases in the week to June 5.

This is more than double the previous seven day period to May 29 where 23 cases were recorded, a 126.1pc increase.

It leaves Ordsall and Salford Quays with a local infection rate of 335.7.

One of the areas of Bolton that has been steadily increasing throughout May, Little Lever recorded its highest weekly total since January in the week to June 5 of 49 cases.

The third Manchester neighbourhood to get into the top ten, there have been 46 new infections in the week to June 5.

This represents an increase of 130pc – 26 cases – from the previous seven day period.

This area, which encompasses the trendy Ancoats Cutting Room square, has recorded 46 new cases in the past seven days.

Again cases in this area have been rising consistently throughout May, but the latest data shows a big jump of 29 new cases – a 170.6pc increase.

According to the government this neighbourhood has an infection rate of 254.7.

Another city centre spot, with a mix of popular bars and high density blocks of flats, there have been 44 cases of Covid-19 in the week to June 5.

This is up by 38 incidences on the previous seven days, a 633.3pc increase.

At the beginning of May it was one of the areas of Manchester that could have suppressed the virus.

In joint ninth places is this Manchester neighbourhood, and two areas of Bolton which all saw 40 cases in the past seven period.

Clayton Vale, in the east of Manchester on the border with Tameside, recorded 31 more than the previous week – a 344pc increase.

Gilnow and Victory has actually seen a decrease in the number of infections, down 26 from last week where there were 66 cases.

This is the same story with the neighbouring area of Halliwell and Brownlow Fold, where cases dropped by 15 from a high of 55.

The only area from Trafford borough to be in the top ten, there were 39 cases of the virus recorded in the week to June 5.