You are Here: Home » News » Main News » Watch horrifying moment driver on wrong side of the road causes head-on crash 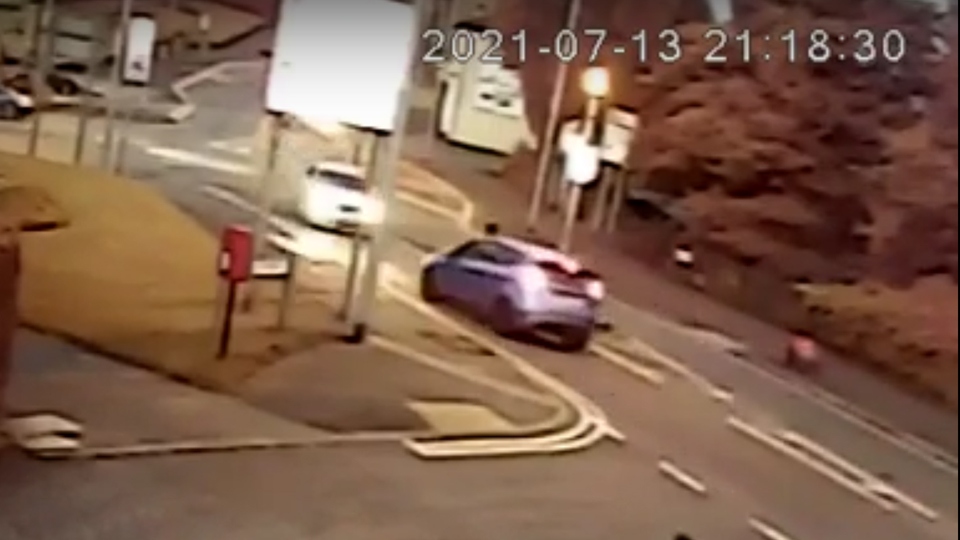 The accident happened on Dale Street, near the Kiln Lane roundabout in Milnrow

This is the horrifying moment a driver swerves on to the wrong side of the road causing a head-on crash with an oncoming car.

The shocking CCTV footage shows the sickening collision between the two vehicles on Dale Street, near the Kiln Lane roundabout in Milnrow, Rochdale.

A white BMW is seen apparently travelling at high speed, before veering into the path of a blue Ford Fiesta – which has no time to take evasive action before the inevitable smash.

Miraculously, the driver of the Fiesta, David Healey, suffered only relatively minor injuries despite clearly being lucky to escape with his life.

He was taken by ambulance to Manchester Royal Infirmary but was given the all clear to return home to Milnrow after being checked over for internal injuries.

The 55-year-old IT engineer had been driving home after popping out to the local Aldi  supermarket to get some food for a planned day out.

He has now spoken of his experience of the crash, which happened at around 10pm on July 13.

“I had spotted him when he was still on his side of the road,” said Mr Healey.

“ I thought he was really moving but he was very close to me by the time he comes across the roundabout and comes over to my side. There was not really time to react, it was so fast.

“He was coming straight at me, then there was the impact, I didn’t have time to think about anything.”

David says the incident was something of a blur, but he remembers the airbags being released and the car spinning after the impact.

“It was probably really quick but it did seem to go on for a long time as the car was spinning,” he said.

“There was no real opportunity to get out of the way.”

He also points out that as well as having no time to react, the proximity of the traffic island left him with ‘nowhere to go’.

David was able to get out of the car once it stopped moving, but was in ‘a lot of pain’ as well as being ‘shocked and dazed’.

He was left with cuts and severe bruising – mostly to his chest and abdomen – but fortunately did not sustain any serious injuries.

He believes the driver of the BMW was left unconscious at first, but was then taken away from the scene in another car by people he understood to be his family.

Speeding and reckless driving has become a serious worry in the area – and David agrees more needs to be done – possibly in the form of more policing patrols.

And that is also the view of Milnrow councillor and Rochdale Lib Dem leader Andy Kelly, who wrote to GMP’s new chief constable urging him to take action.

“It’s similar with Dale Street, Isaac Newton Way and Rochdale Road in Firgrove too. I can’t stress this enough however, it is not just speeding, it’s high speed, reckless and life endangering drag racing.

“We are talking about high performance cars with loud exhausts and sports tyres that are causing the issue and if they are uninsured, untaxed or illegally registered then no number of speed guns or letter writing will deter people who don’t care about those things.

“We need to see GMP stopping, arresting and prosecuting these people before deaths occur.”

It is also hoped the scheme will also assist GMP in building up a knowledge base of repeat offenders and higher level crime.

Coun Kelly added: “Residents in the local community are doing their bit to combat drivers going over the limit. GMP need to step up and arrest the criminals who are risking lives by doing what they do.”

The former chief inspector added: “The matter of road safety will only improve with interventions at your level within your respective areas of service provision.”

What the police have to say

Speaking to the Local Democracy Service, he said: “We are aware of an increase of incidents of speeding in the Rochdale area and share local residents view that this is unacceptable. Speed limits are there for a reason.

“Not only do excessive speeds increase the chances of driver error and time it takes for the vehicle to stop, but higher speeds also increase the fatality rate for pedestrians who may be involved in a collision with that vehicle.”

Sup Hayden-Pawson added that there were ‘several tactics’ in place to combat the issue and keep people safe – with GMP’s Our Safer Road Targeting Team carrying out ‘regular patrols’ in the Rochdale area.

“In addition to this we have trained local neighbourhood officers in using speed enforcement equipment and these officers are being deployed to hot spot locations,” he said.

“We will continue to take appropriate action against those who drive above the speed limit or dangerously. Alongside these deployments, we also continue to work with the local authority and partners on road safety to keep residents of Rochdale safe.

“I would like to thank you the majority of responsible road users who do abide by the speed limit, and remind those that don’t, that speeding can have devastating consequences.”

GMP did not confirm whether any arrests have been made in connection with the crash on Dale Street. An investigation is understood to be ongoing.

Anyone who has information or dash cam footage  of anti-social driving is encouraged to contact the police online through the GMP website.