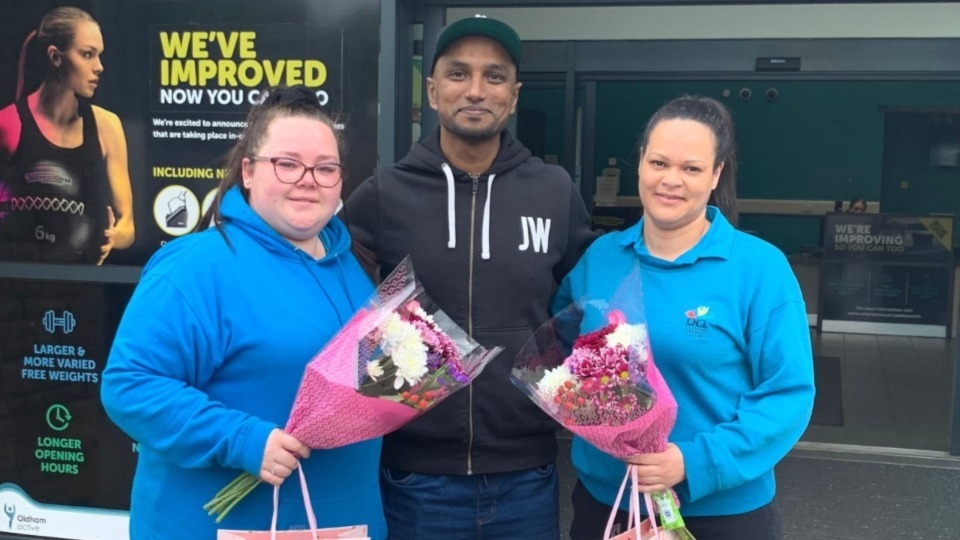 There was an emotional reunion at the Saddleworth Leisure Centre when amateur cricketer Fazli Fard returned to personally thank two heroic ladies who saved his life six weeks earlier.

Family man Fazli, who is 38, lives in Bolton, but was playing cricket at Uppermill Cricket Club's Leafields ground on Sunday, May 15, when he suddenly became seriously ill during a match.

Playing in a T35 League match for his Northern XI CC team against United Rangers, Fazli collapsed on the pitch, was effectively brought back to life by Chelsea Nield and Lisa Dudley, before eventually being whisked away in an air ambulance to the Manchester Royal Infirmary for emergency treatment.

Thankfully Fazli, who has a wife and young daughter, is now well on the road to recovery, as his close friend and team-mate Shukri Nizam takes up the story.

Shukri told us: "Firstly we were playing our match at a neutral venue at Uppermill because United Rangers' ground in Manchester wasn't available.

"Fazli drove us to Uppermill from Bolton on the day and he was fine on the way - just his usual self.

"He's a very fit lad. He works hard for his family at two jobs and we actually call him 'Speedster' because he's so quick around the cricket pitch and when he's bowling.

"He volunteered to be a square leg umpire for a little spell, and at one point was rubbing his chest.

"We thought he'd maybe pulled a muscle or something, so he took some ibuprofen tablets.

"A little later Fazli was bowling and just before he was about to start his run-up, I saw him on the ground as I was fielding too.

"I thought maybe he was maybe stretching or something, until I realised he had collapsed.

"We thought he'd possibly had a seizure as he was foaming at the mouth, he was struggling to breathe and seemed very stiff.

"We were all very upset, and called for help as there were a few people drinking in the bar.

"All of a sudden Chelsea and Lisa appeared from the adjacent sports centre with a defibrillator and gave Fazli CPR.

"They were pushing his chest and everything and revived him, before paramedics came and then an air ambulance arrived and flew him to the MRI."

Fazli, who is continuing his recovery encouragingly after spending a few days in the ICU, can't resume his cricket yet, but he felt compelled to head back to personally thank Chelsea and Lisa last week at Saddleworth Leisure Centre, where the ladies both work.

Shukri added: "It was all very emotional when our whole team went back to say a big thank you to Chelsea and Lisa.

"Fazli and the rest of the team will never forget what they did that day.

"They started crying, but they are two very kind ladies who should be very, very proud of themselves for what they did."