You are Here: Home » News » Main News » Plans for new classrooms and sports hall in major remodel at college 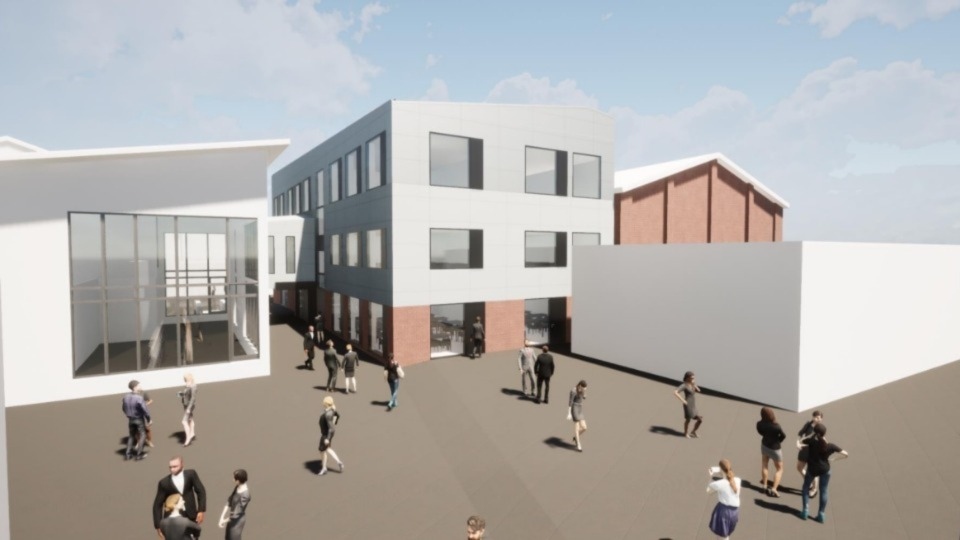 The proposed extension to Ashton Sixth Form College next to the sports hall. Image courtesy of aad architects

Plans for ten new classrooms and a remodelled sports hall at a Tameside further education college have been lodged.

Ashton Sixth Form College has applied to the council to build a three storey extension and upgrade its sports facilities.

The college, which is based on Darnton Road, currently has more than 2,000 pupils on its roll and was rated ‘outstanding’ by Ofsted in 2020.

However, a report submitted with the application states that the space on the educational site ‘falls somewhat short of accepted standard’.

And there are currently four temporary classrooms in situ, with a ‘strong possibility’ that another four will be needed to cope with pupil numbers.

Even student study spaces and some meeting rooms have been converted into classrooms to meet demand, according to planning documents.

Analysis of the college site has founded that the supporting areas next to the sports hall are ‘most in need to transformation’.

The documents submitted with the application state that currently the college only has two classrooms within the area, ‘one of which is too small to host anything but small group sizes, and both are served by a limited amount of natural light’.

“Providing larger teaching rooms in the new extension will improve provision significantly enhancing the curriculum area as well as offering flexibility over the college to facilitate teaching within other associated subject areas,” it states.

“The college have identified a particular shortfall in respect of their sport, health and wellbeing provision and wish to enhance this to continue to build on its reputation for quality and cement its long-term future.”

While the existing sports hall is being retained, areas inside are to be remodelled to increase its ‘appeal and efficiency’, including the installation of a new viewing gallery.

The current single-storey ‘lean to’ extension is proposed to be largely demolished and replaced with a new extension which would include two ‘efficient’ Sport England standard changing rooms with individual shower cubicles.

It will also have ten new teaching classrooms, split over three floors, as well as an accessible changing area and shower room and staff facilities.

It will include two new access stairs and a lift, and provide direct access from the changing rooms to the sports fields.

A decision on the application is expected to be made by the end of September by planning chiefs.