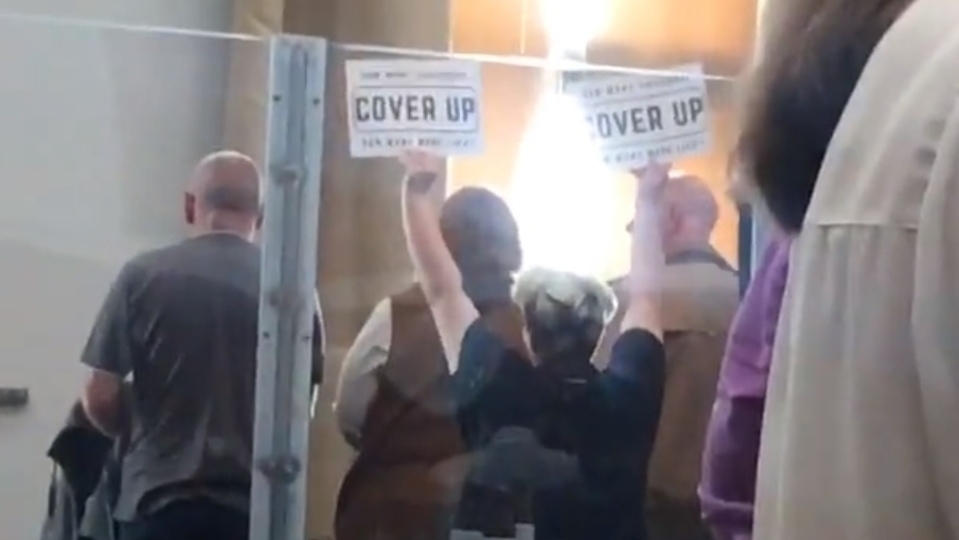 Letters from the local authority have been issued to people who are deemed to have been disruptive, and engaged in ‘threatening and aggressive behaviour’ at meetings at the Civic Centre on June 27 and July 13.

Scores of protesters had attended both of these meetings, the former of which was held specifically to discuss the findings of the review into allegations of historic child sexual exploitation in the borough.

Four people have been informed this week they have been banned by the council from attending further meetings for a period of a year, and that their ‘behaviour’ has been reported to Greater Manchester Police.

The authority says letters have been sent to those people where behaviour was believed to have met a threshold for action, and ‘will not be tolerated’.

However Councillor Brian Hobin, leader of the opposition Failsworth Independent Party group on the council, told the Local Democracy Reporting Service the move was a ‘negative step’ and could ‘fuel more protests’.

A letter sent by the council’s ‘community safety services’ department to one resident stated: “During the full council meetings on the 27th June and the 13th July 2022, which we aware you attended one or both of, there were significant concerns raised regarding the behaviour of some individuals present.

“These behaviours included, but were not limited to, verbal abuse and foul language directed to elected members and local authority staff.

“Disruptive behaviour including preventing individuals from answering questions or providing statements to the meeting, by constantly shouting over them, thereby reducing the effectiveness of the meting, preventing it from being run in a fair and democratic manner.”

The letter stated there had also been ‘throwing of missiles during the meeting’.

One bottle of hand sanitiser was witnessed by the LDRS being thrown over plastic partitions –  which were installed as Covid-19 measures around the public gallery – at the meeting of July 13, near to council staff. The bottle did not hit anyone. 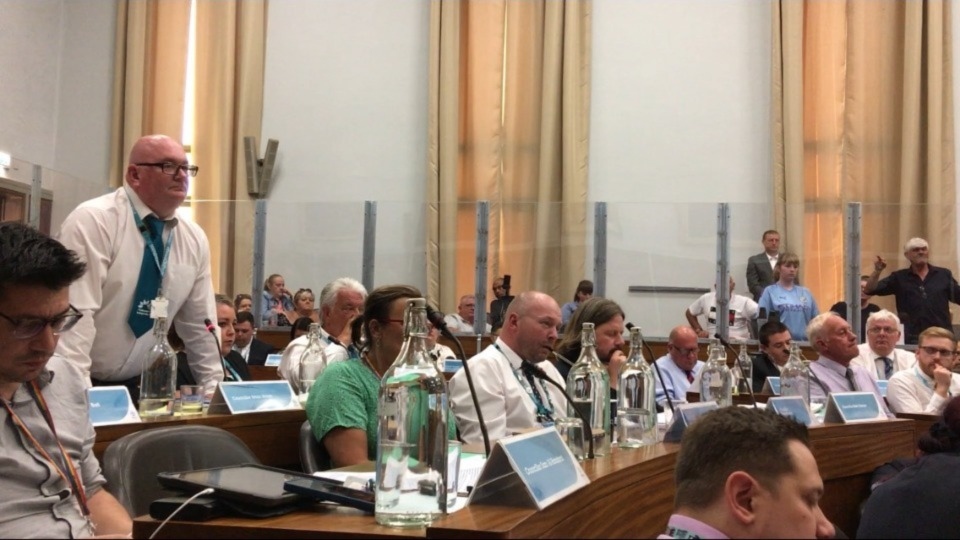 The three hour meeting this month was turbulent from start to finish, with several members of the public holding protest signs and frequently banging the plastic partitions, as well as heckling and shouting over councillors.

At the June meeting some members of the public had gone onto the floor of the chamber to remonstrate with the panel, which included Mayor Andy Burnham, council leader Amanda Chadderton and Greater Manchester Police Chief Superintendent Chris Bowen.

Other behaviour highlighted by the letter included ‘intentionally or recklessly causing a public nuisance’, ‘attempting to scale’ and ‘banging’ on the safety barrier.

The letter alleges that a person told a member of local authority staff ‘you know all about penetrating young girls’.

“We must be clear that unacceptable behaviour of any kind, including that outlined above, cannot be allowed to continue and will not be tolerated,” it adds.

“Due to your behaviour, it has been decided that with immediate effect, you are banned from attending all public meetings and on the date of those meetings, from entering the public buildings in which they are being held.

Residents who have received such letters have been informed they can appeal against the decision to the community safety services department within two weeks.

However the letter also states that the authority will seek ‘legal remedy if necessary to control the behaviour of individuals who are acting in an anti-social or criminal manner’.

This includes an injunction being made to a country court for an anti-social behaviour injunction (ABSI). This could include further prohibitions such as not being able to contact specified individuals.

However Coun Hobin said: “The chief executive has a duty of care for the safety of members, officers and the public at council meetings and measures have been put in place at the Civic Centre for this.

“People are already upset and disappointed with the council and these banning orders  could be seen to further disenfranchise residents. It may even encourage more members of the public to attend meetings and how many are the council willing to ban?

“Maybe the best resolution would be for the council to provide full answers to their questions and requests.”

A spokesperson for Oldham council said: “We welcome and encourage the attendance of residents at public meetings.

“Resident engagement with the democratic process is essential, and we recognise that, sometimes, the nature of the issues we discuss will elicit a passionate response.

“However, all attendees at public meetings need to behave appropriately, to ensure meetings can be run fairly, safely and effectively.

“Banning people from entering local authority premises, including the council chamber, is not a decision we take lightly.

“However, we have been forced to take this action against a small number of individuals to ensure the safety of elected members, staff, and members of the public.”