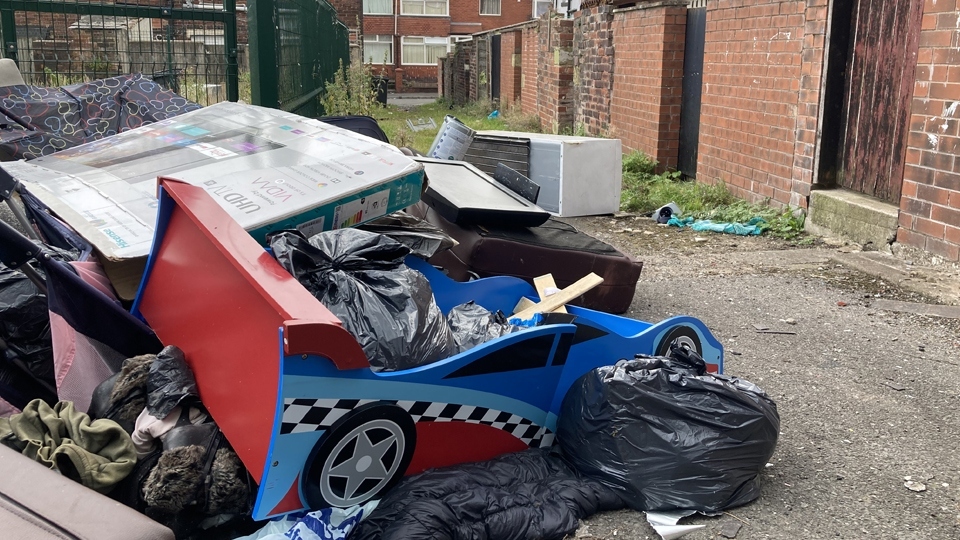 An example of some rubbish dumped in Oldham

Oldham’s Liberal Democrat Leader and Shaw representative, Councillor Howard Sykes MBE, has urged Oldham Council to 'think outside the box' when it comes to tackling fly-tipping.

In a letter to council bosses, Cllr Sykes has called for the council to apply for grant funding from the government; and highlighted three strategies that have shown good results elsewhere in the country.

Cllr Sykes said: “Fly-tipping is a crime which harms our natural world, blights communities and costs council taxpayers thousands to clean up and councils time and staff resources.

"If there is extra funding available from the government Oldham must be sure to apply for that funding.

"The councils that deal with fly-tipping best are the ones who have multiple schemes in place to prevent and prosecute offenders.”

The Liberal Democrat Leader’s letter highlights increased use of CCTV, compulsory education courses for repeat offenders and even artificial intelligence as measures that Oldham could adopt.

"The Liberal Democrat group put forward proposals aimed at tackling fly-tipping in our budget amendment earlier this year, but the Labour chose to vote them down.

“Fly-tipping is an act of environmental crime and it blights our environment.

"Tackling things like this in a robust way should be entry level stuff for any administration.

"We need to see Oldham council getting the basics right not taking a soft approach as they have been doing.”

In response to Cllr Sykes' concerns, Oldham Council has insisted that fly-tipping remains a priority and that staff hard work is 'paying off'.

Cllr Jean Stretton, Cabinet Member for Neighbourhoods, said: “Cleaning up the borough and tackling fly-tipping is a priority for the council and residents – that’s why we launched Don’t Trash Oldham nearly 12 months ago.

“At a time when most councils are cutting front line services we’ve invested extra money into the initiative.

"We would have liked extra funding from the government on top of our investment, but they didn’t approach us and allocated funding to other councils

“Our staff are currently cleaning up Hollinwood and so far from the other 19 wards we’ve collected more than 290 tonnes of waste – that’s around the same weight as a 747 jumbo jet.

“We’ve cleaned more than 3,900 streets and alleyways and also fined 348 people for environmental crimes because we know residents want us to take action against those who blight their communities.

“All this is on top of the work our front line teams carry out daily.

"I can’t praise them enough, and also all the residents, schools and stakeholders who have supported us.

“The work is paying off – residents are telling us their communities are benefiting and they are seeing a difference.

“In Year 2 of the campaign we’ll be continuing work to improve the borough and we will be revealing more about our plans soon.

"These include more enforcement and work with residents."

To report fly-tipping and to learn about how you can get involved in cleaning up the borough, visit: www.oldham.gov.uk/donttrasholdham