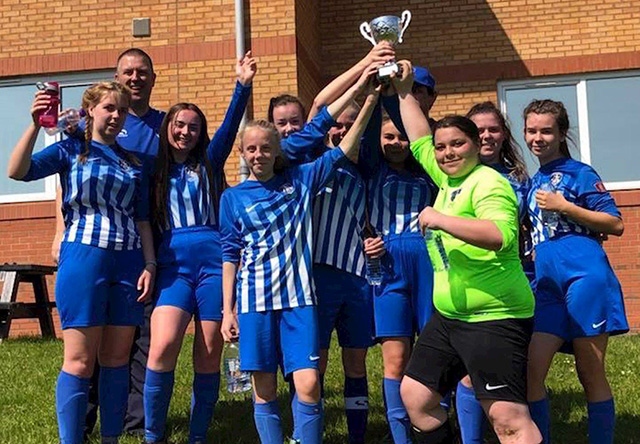 Oldham Athletic Girls and Women’s FC have secured a £3,000 grant from The FA

England Women and Arsenal striker Danielle Carter has praised Grow the Game and Oldham Athletic Girls and Women’s FC following their award of a £3,000 grant from The FA.

The grant, which will provide a huge boost to grassroots female football in Oldham, has paved the way for Oldham Athletic Girls and Women’s FC to help and develop young female players.

The money will enable the club to educate new coaches and help them deliver good quality sessions to help the players develop and subsequently compete in organised leagues.

Danielle said: “I would like to congratulate Oldham Athletic Girls and Women’s FC on working with the Football Foundation and Manchester FA to secure a Grow the Game grant.

"Playing in an all-female team from a young age was key to my development, so I am delighted that there will be more opportunities for women and girls in the local area and wish Oldham Athletic Girls and Women’s FC good luck during their new team’s debut season.”

Grow the Game is a programme funded by The FA and delivered by the Football Foundation.

Jean Coombes, the club’s treasurer, said: “This grant from the football foundation will enable the new teams to be able to be more sustainable for the first two years within the league that they will play in.

"I think that the grow the game grant is a valuable asset to grassroots clubs and teams throughout the country."