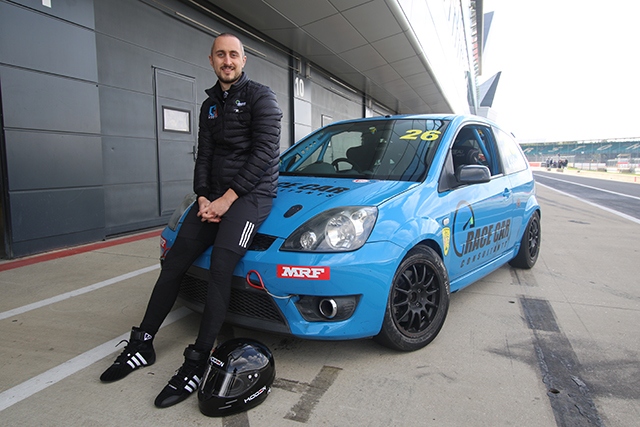 Chris Loder pictured at Silverstone with his car

Oldham speedster Chris Loder made an encouraging impact during his first outing in the BRSCC Fiesta Championship series at the world famous Silverstone circuit in Northamptonshire.

Loder was ecstatic with the qualification times that he produced on the Grand Prix race track.

After a 20-minute qualifying session, he was pleased to see he had achieved the position 11th out of 21 competitors, thanks to a personal best time of 1:22:282.

The qualification results gave Loder huge confidence and set him up for a good weekend of racing.

For Loder’s first ever competitive race, the conditions were extremely wet.

Having done no practice in wet conditions, it was always going to be a tough challenge.

He spun on the second lap at Abbey in treacherous conditions and as a result went to the back of the pack.

From then on it was just a case of finishing the race without any damage, and using it as an opportunity to get used to the damp conditions.

Loder started to re-take some of the lost positions and eventually finished the race in 16th position of the 21 that started.

Conditions on track for the second race out of three were a mixture of dry and wet.

Pushing on well in 13th and catching up to 12th-placed competitor in front, Loder had another spin at Abbey on the seventh lap.

After a thrilling remainder of the race, Loder found he had finished in a very respectable 15th position.

An improvement from race one, so Loder was very happy with his performance.

By the time race three was to start, the sun was out, and conditions were dry.

Loder knew he had good pace from the qualification session.

He soon found himself in another battle with number 23, Zachary Lucas, for ninth position.

Once he got past him, Loder was consistently setting laps of 1:22 and pushing hard to catch up with eighth position, the number 80 of Tim Glover.

Unfortunately Loder ran out of time and he finished in ninth position out of the 19 who were on the grid.

It was great to finish the race weekend on a high, after some initial setbacks.

Loder is next out at Brands Hatch in October.