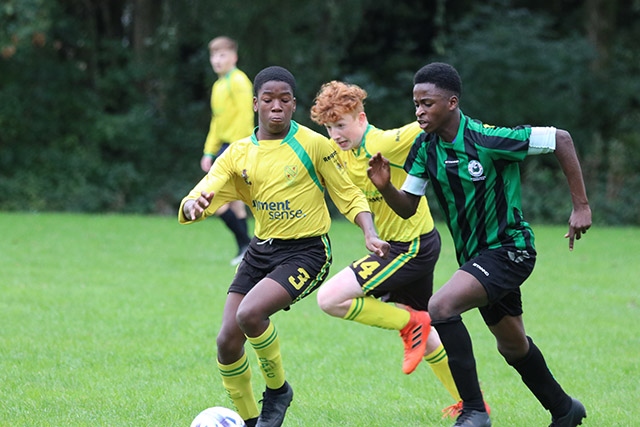 Chadderton Park under-15s Lions progressed to the next round of the after beating West End Boys 4-3 on penalties after a pulsating game had finished 4-4 in normal time.

Kieran Akehurst drilled in a corner that forced a West End player to put the ball into his own net to put the Lions 1-0 up.

West End equalised when they punished a sloppy pass to make it 1-1.

The Lions regained the lead when Kristian Walker tapped in another Akehurst corner.

West End then hit the Lions with a quick one-two to take a 3-2 lead, but the Lions rallied and tried to hit back.

However, it was soon 4-2 to West End when they scored from a free-kick.

Once again the Lions came back with Dalton Martins bravely tapping the ball home to make it 4-3.

They levelled when a lovely through ball was played for Akehurst who finished to make it 4-4.

The Lions then ran out 4-3 winners in the penalty shoot-out.

Park’s under-19s Eagles picked up their first win of the season with a hard-fought 2-1 outcome away at previously unbeaten Hattersley FC.

Declan Rooney opened the scoring, before Hattersley levelled the game with a well-worked goal.

With 15 minutes left a great move by the Eagles saw Will Greenhalgh lay the ball off to Regan McCarthy just outside box, and despite being under pressure from two Hattersley defenders, he fired the ball into the top right hand corner to make it 2-1 to the Eagles.

Larry Majeck scored first with a booming header from a pinpoint corner from Kieran Akehurst.

Shawclough equalised in the second half, before then being reduced to ten men.

Kane Stevens made it 2-1, and it was 3-1 minutes later when Kristian Walker went charging through with a fine run and finish.

Martim Fernandes (two) and Alfie McMylor were on target for Chaddy.

Chadderton Park under-15s Dragons made it three league wins out of three with solid 7-1 triumph at Stockport Vikings.

The Vikings punished the Dragons by going 1-0 up.

But the Dragons soon responded and Saja Manafa equalised and Jaden Bradford made it 2-1 just before half time.

The second half was dominated by the Dragons and they were soon 5-1 up after great finishes from Abdullah Cheema (two) and Bradford with his second of the game.

Reece Booth scored a penalty he won to make it 6-1 and Jaden Bradford completed the scoring and his hat-trick effort.

Three Frame Players from the Chadderton Park Cerebral Palsy team (pictured above) took part in the Frame Football Tournament that was held at St Georges Park - the Home of the England football team.

The club is always looking out for new players for their pandisability football teams.