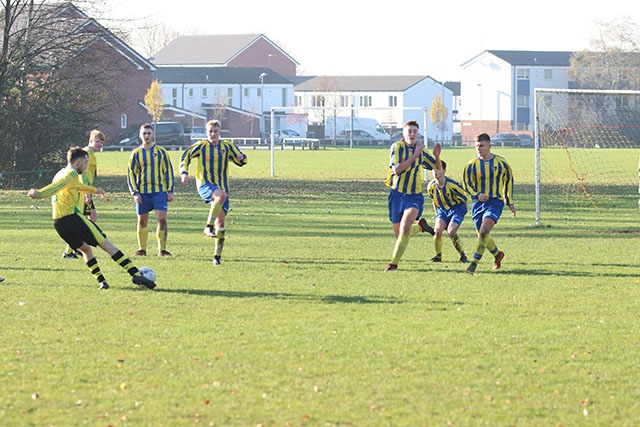 Chadderton Park under-15s Lions cruised to an 8-0 away win at Bridge JFC Hawks.

Lewis North opened the scoring, with Kristian Walker making it 2-0 with a tap-in.

Bridge created a number chances, but Kameron Starrs was on form and produced four excellent saves to keep Bridge off the scoresheet.

In the second half it was one-way traffic. Kieron Akehurst got the scoring under way with a fine chip shot and then followed that up with a cheeky back heel from a corner.

Walker and North both grabbed their second goals of the game.

Adam Belwassa and Sheick Abdoul completed a fine display for the Lions as they claimed the three points.

Park's under-19s Eagles had to settle for a point against Littleborough as they played out a 2-2 draw.

Will Greenhalgh and Byron Smith got the goals for the Eagles.

Chadderton Park under-15s Dragons advanced to the final of the Primary Cup for third consecutive season as they beat the holders, Glossop Blues, 4-0.

The Dragons lead 1-0 at half time, but goals from Saja Manafa, Abdullah Cheema and Reece Booth ensured they would get the result.

Goals from Kristian Walker and Antonis Koiloropolous wasn’t enough as the Lions could not find that elusive equaliser.

It was a harsh result because the Griffins outplayed their opponents and looked like they were the better team.

Dylan Cooper grabbed the only goal for the Griffins.

Goals from Poppy Moorhouse, Anna Keeling and Emily Parsons made it 3-0.

Annie Taylor and Heidi Sheldon made it 5-0.

Goalkeeper Amy Tapper was unlucky not to keep a clean sheet as Oldham grabbed a late consolation goal.

Chadderton Park under-18s Lionesses were left disappointed as they were beaten 5-2 in a feisty affair against AFC Manchester.

Tara Phethean was the only scorer for the Lionesses as she grabbed both of their goals.

They tried and tried again to get something out the game and played some excellent football at times, but in injury time AFC Manchester grabbed that fifth goal to deflate any hopes of a comeback.

Players from Chadderton Park Phoenix under-11s and Elton Sports Club supported the National Anti-Bullying Week with players from both teams choosing to wear odd socks as a symbol of individualism.

The game was played in great spirits with all involved thoroughly enjoying the game.