You are Here: Home » News » Local Sport » Masters of the pool!

Masters of the pool! 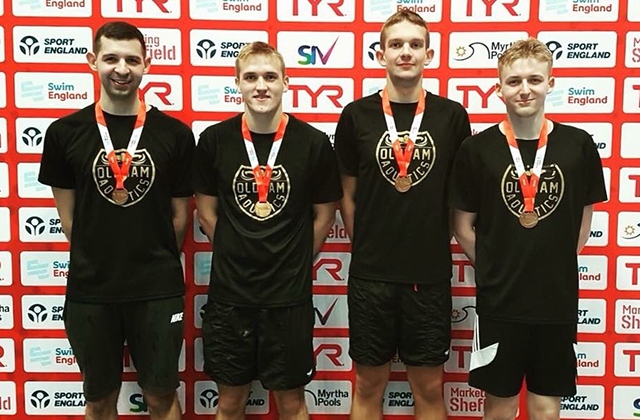 The squad trains at various pools in the local area, all run by Oldham Community Leisure.

The event – held at Sheffield’s Ponds Forge International Sports Centre – is the highlight of the UK Masters swimming calendar and around 1,000 competitors took part.

Royton's Matthew Lees, aged 29, was the first from Oldham to compete.

He fought a close race in the 50, Fly and – despite being narrowly beaten – posted his quickest time since 2014.

Saddleworth's David Rees, aged 45, finished top four in all his events across the 45-49yr category and won 50m Butterfly gold with his fastest time this year.

In the 200m he set a new personal best to finish ninth in the British rankings for his age this year.

Aidan Tevlin, aged 19 and the youngest of the group, was the busiest Oldham swimmer with five individual events in the 18-24 category plus four relay swims.

Despite this, he swam the 50m Backstroke in under 30 seconds for the first time and improved by two seconds in both the 100m Freestyle and Backstroke to gain a hat-trick of personal bests in his maiden National Masters.

Although not normally a breaststroker, McCue held his own after Morreal’s back leg and Wain’s quick 1:00.92 for the Fly set Tevlin up nicely to bring home bronze.

McCue and Wain also joined in the 400m Free and 200m Medley team events to finish fourth and sixth.

Finally, in the 200m Free relay, Lees, McCue, Morreal and Tevlin ended a successful year as a quartet with a season’s best.

Their time of 1:42.46 was a second quicker than their last race together, when they won May’s Yorkshire Masters.

Masters Coach Vicki Hart said: “It was really pleasing to see everyone in the Oldham Aquatics squad win a medal.

"I thought we had a chance in the relays but it was a bit nervy to watch!

"We had some fantastic individual swims and the relay helped cap a great weekend.”

The next competition for the whole squad will be the Northwest Masters Championships next year, which is usually held in Blackpool in February.