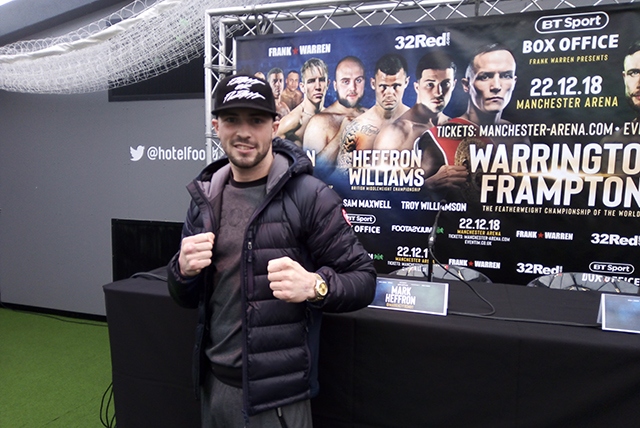 Oldham boxing star Mark Heffron is preparing himself for what he hopes will be a ‘massive’ end to 2018.

Unbeaten power puncher Heffron – who has won all 21 of his professional fights so far – faces the biggest bout of his life on December 22 when he challenges Welshman Liam Williams for the vacant British middleweight title at the Manchester Arena.

The fight – chief support to the mega IBF World featherweight title set-to between Josh Warrington and Carl Frampton – promises to be a cracker, with two giant punchers set to go head-to-head after previous British title holder Jason Welborn opted not to defend against Heffron, now 27.

Speaking to the Chronicle at today’s pre-fight undercard press conference, a determined-looking Heffron said: “My training camp has gone really well and I’ve been getting some really good sparring in with (former WBO World super welterweight champ) Liam Smith.

“I’m over the moon just to be part of this massive show to be honest.

“Hopefully it’ll give me a massive finish to the year.

“I’m ready for this step up now. In fact I’ve been waiting a long time for this kind of opportunity.

“I’ve had a few people pull out of fights against me and stuff, but Liam Williams is there now and I’m more than ready for him.

“I’m training for a solid 12 rounds in there – if I get a knockout earlier then I’ll be happy, but getting more rounds in would at least give me more experience.

“It’s every British fighter’s dream to win a British title outright, and I’m aiming to do just that.”

Williams, aged 26, has lost just those two bouts to Smith in a 21-fight career so far, and in 2014 he defeated Mark’s brother Ronnie, thanks to a sixth-round stoppage, also at the Arena.

That defeat for brother Ronnie isn’t particularly motivating Mark, however.

“A lot of people have been saying this is a chance to gain some revenge and blah blah blah things like that, but there’s no revenge on my mind,” added Mark.

“Liam Williams was offered to me as an opponent, the money was good so I said ‘yes’ straight away.

“I’m not in this game to avoid anybody. Bring it on I say.

“People are saying it could turn out to be the best fight on the night, but right now I’m just buzzing to be a part of the whole show.”

Should Heffron go on to defeat Williams on the Saturday before Christmas then it’s sure to guarantee a joyful festive period in the household, and then who knows what may follow in 2019.

Heffron stopped short of predicting potential world title glory in the future, instead maintaining a measured approach when asked where his boxing career may go next.

He said: “It’s just about taking each step individually.

“Whatever my management and Frank Warren offer to me, if they think I’m ready, I’ll always be more than happy to move forward in whichever direction possible.”

More details on how to book tickets for the BT Sport Box Office show at the Arena can be found by logging on to: www.frankwarren.com

Don't forget, Failsworth's Danny Wright also features on the undercard at the Arena show next month.