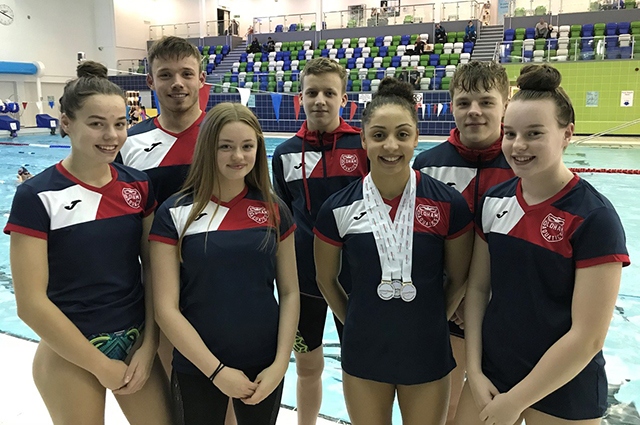 Seven swimmers from the Oldham Leisure Centre-based squad competed at the event, which took place at Manchester Aquatics Centre.

Jessica said: ”I am pleased with my performances and I feel it has secured me in my pathway for success at Winter Nationals.”

Calderbank struck gold twice in the Women’s 17yrs and over 50m and 100m Butterfly, swimming with personal best times in each race.

Goldrick was victorious in the Men’s 17yrs and over 200m Breaststroke.

Both secured medals in all their events, with Calderbank finishing second in the 50m Freestyle with another personal best and Goldrick winning three silvers in the 50m and 100m Breast, plus the 200m Fly.

After qualifying for the finals of the Men’s 17yrs and over 50m and 100m Fly, Luke Kearslake, aged 18, narrowly missed out on a medal, finishing fifth in both races.

He swam 25.97 in the 50m race, finishing in under 26 seconds for the first time in a short course (25m) pool and matching his long course personal best – a time that won him the Welsh Nationals last season.

She set personal bests in both – her 100m Fly time came in a swim off for the final.

Burston beat a swimmer a year older than her to make the final, where she improved her qualifying rank to finish seventh.

Amy Harrison, aged 15, swam in the Women’s 16yrs and under 50m Breast – an event she also raced at last season’s Summer Regionals.

Coach Mark Lord said: “I am pleased with the early season form our swimmers have shown at these championships and I am looking forward to more success.”

Oldham Aquatics, who train in facilities run by OCL, are now aiming to build on their success and gain qualifiers for the Winter National Championships.

The squad won eight golds, one silver and four bronzes to finish eighth out of 26 teams in the recent Wigan Best Future Stars Open Meet, and won five more at the South Yorkshire Open Masters Meet.