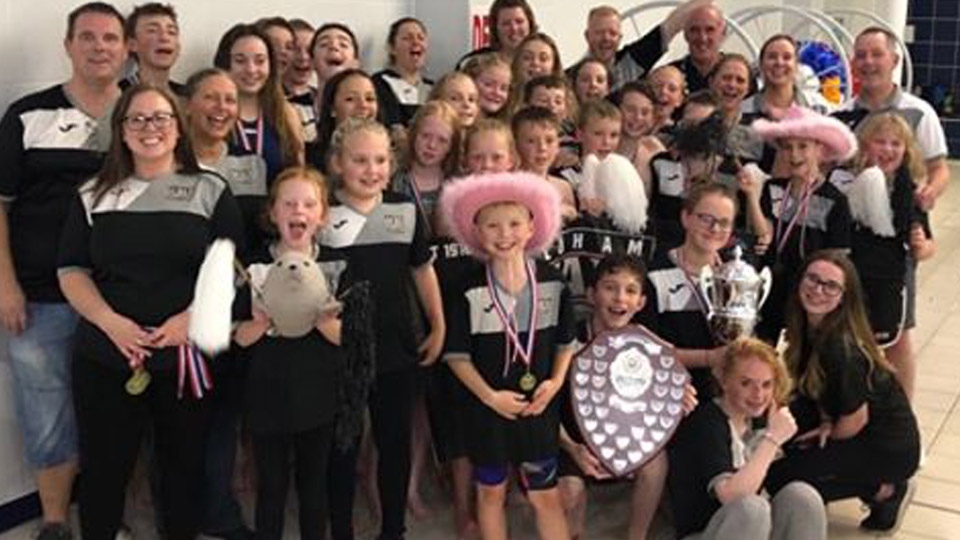 Junior Jubilee Seals were crowned Central Lancashire Jubilee champions for the second consecutive year after an exciting and close A Final at Oldham Sports Centre on Friday Night.

All four teams-Flixton, Seals, Chadderton and Howe Bridge took part in the traditional pre gala parade to acknowledge their achievement of reaching the top four A Final.

Banners,Sombreros, cowboy hats and Pom poms where all on show.

Once the formalities and warm up were complete it was down to Referee Caroline Horton to get the racing underway.

Right from the off it was clear the Gala was going to be a two horse race between Flixton and Seals with Oldham posting a 1 point lead after the first quarter.

By the half way point Flixton had pulled in front and led Seals by two points with Howe Bridge and Chadderton fighting hard for third place.

Flixton held on to the lead throughout the third quarter of the gala opening up a 7 point gap that Seals managed to reduce to 2 as we headed into the last 10 races.

Once again, it was Seals strength in depth that proved the difference with Oldham creeping into the lead and finishing off a successful comeback and sealing the Championship with two wins in the final Cannon Relays.

Central Lancashire President John Entwistle was in attendance to present the trophy to his home team.

Club Secretary Rick Cocker said, "A Massive well done to all our Jubilee Squad swimmers who have taken part in this successful campaign, especially Junior captains Joel and Ellie, who swam for the last time in the Jubilee league.

"We are very proud of each and everyone of you.