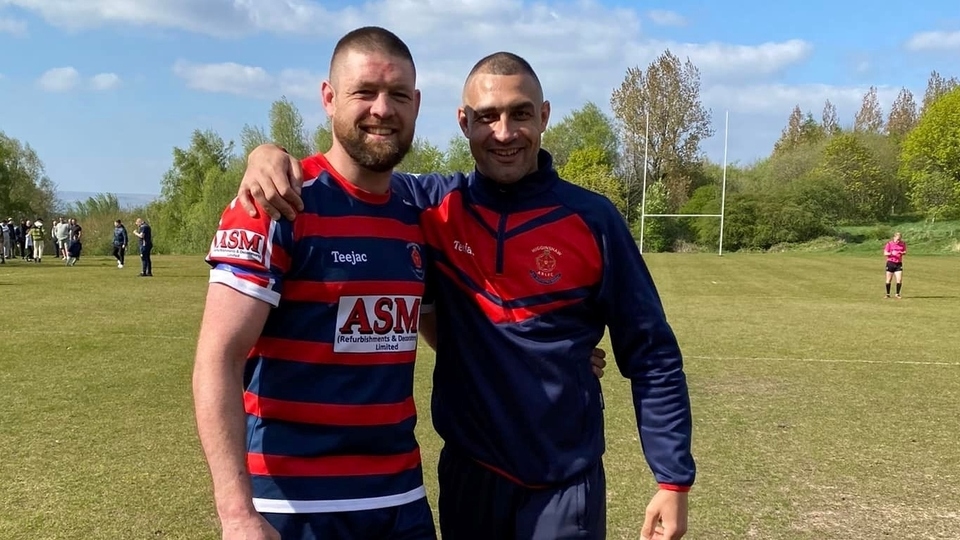 Higginshaw continued with their unbeaten run for the new 2022 campaign, in their first home game of the season on sunny Spring like conditions on Oldham Edge with a healthy crowd.

It was a tough first 20 minutes as booth teams went head-to-head, Higginshaw fielding 2 new signings in Ex Oldham player Ben Heaton and Sam Thackeray once with Warrington Academy, both were impressive in their first game in the Higginshaw shirt.

With the game swinging from one end to the other, it was Higginshaw who went in front on 20 minutes, when a break by Adam Horabin who sent standoff Kiel Lancashire away who then sent in centre Ben Heaton who flew in for a try wide out, Kiel Lancashire converted off the touchline for a 6 – 0 lead.

Oldham St Anne’s hit back with a good try from Kendal Davies converted by Paul Ainsworth to tie the score at 6 all on 25 mins.

Higginshaw’s forwards started to dominate possession and went close on several occasions, then great work from prop James Hall created space to send in Sam Thackeray for his first try for Higginshaw, for a 10 – 6 lead on 30 mins.

Higginshaw continues to make push forward, in a sweeping move involving Nathan Mason, Lee Atkinson and Gareth Sharrocks sent in Sam Thackeray who showed his class by weaving past 4 defenders for his second try with Kiel Lancashire converting  just on half time for a 16 - 6 score line.

In the second half Higginshaw dominated the possession, with Kiel Lancashire sending centre Jordan Hanley away who sent Keenan Mason in for a try, with the kick going wide, leaving the score tried again 20 – 6 on 45 mins.

St Anne’s had a spell of pressure, but Higginshaw held a strong defence line with James Hall, Nathan Mason and Murphy Holt kept the line intact, with Gaz Sharrocks and Callum White all supporting on defence.

Higginshaw kept forcing the pressure, it was a break from Nathan Mason backed up by Jack Hughes that set up the position for Kiel Lancashire to put Ben heaton in for his second try, Kiel Lancashire convert for a 26 – 6 score line, and game over.

The final try of the game Gareth Sharrocks raced up the touchline to seal the victory with Kiel Lancashire convert from the touchline for a winning 32 – 6 score line, and game over.

The game was a credit to both teams but to their credit Higginshaw’s defence won the game for them, but it was a hard-fought victory, a well deserved result.

Man of the Match was Ben Heaton, and Sam Thackeray & James Hall in 2nd & 3rd.