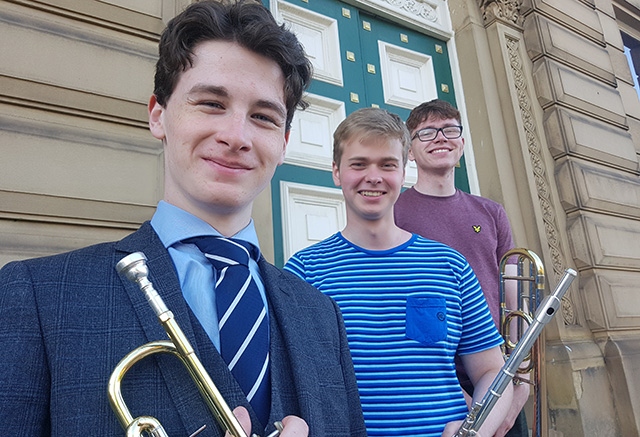 A talented young musician, taught at Oldham Music Centre, has been chosen to play at the Royal Albert Hall as part of the BBC Symphony Orchestra.

James Kelly (aged 18), Oldham Youth Orchestra’s principal trumpet, will take to the stage at the iconic London venue on July 13 for the televised First Night of the BBC Proms as part of the BBC Proms Youth Ensemble.

Currently in his final year of A-level studies at Crompton House Sixth Form, James previously attended St Joseph’s Primary School in Shaw and has been a Music Centre pupil throughout.

He has been offered and accepted a place at Trinity College of Music in London from September and is also a member of the Hallé Youth Orchestra.

The band had a very successful evening, picking up ten awards including two for James as the best soprano cornet at the Lydgate and Dobcross contests.

Two other members of the Oldham Youth Orchestra are also celebrating after recently finding out they have been awarded places at the prestigious Royal Northern College of Music in Manchester from September.

Matthew Jones (flute) and Patrick Cooke (trombone) have also both been long-standing members of the Oldham Music Centre ensembles and have participated in foreign tours as well as performances all over the UK.

Patrick has also recently been successful in his musical endeavours, as he competed in the Rochdale Youth Festival of Performing Arts earlier this year and was awarded the UK Olympics Trophy Brass Solo which also resulted in the opportunity to perform in Rochdale Town Hall as part of the prize winners’ concert.

Councillor Paul Jacques, Cabinet Member for Education and Culture, said: “This is fantastic news. Congratulations to all three musicians and good luck.

“In Oldham we have a remarkable Music Centre which is dedicated to teaching and mentoring young musicians. We have a huge number of young, talented musicians that come through the centre and we’re incredibly proud of them.

“There are so many positives to playing an instrument or creating music. It’s a fantastic way of relieving stress, improving coordination, socialising and more than anything it’s a lot of fun.

“If you’re interested in learning to play a musical instrument or joining a group, I urge you to come along to the Summer Festival to learn about the wide range of Oldham Music Centre’s offer.”