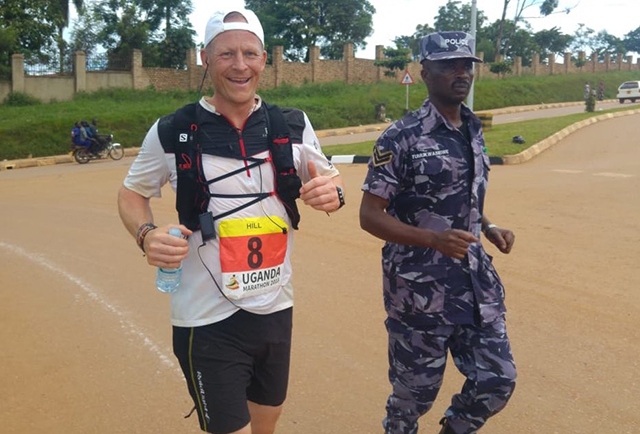 Intrepid St Joseph's primary school deputy head Steve Hill MBE has been shortlisted for the prestigious Teacher of the Year Award at the Educate Awards ceremony in Liverpool on November 16.

Steve said: “I was gobsmacked when I heard that I had been nominated and then shortlisted for the Teacher of the Year Award.

“I’ll be proud and honoured to be flying the flag for Oldham at the Awards next month.”

Steve, who earlier completed the gruelling Arctic Ice Ultra Marathon and before that has taken in expeditions up Mount Kilimanjaro, Mont Blanc and trekking through the Sahara Desert in aid of numerous charity causes – including Dr Kershaw's Hospice, Cancer Research UK, the RSPCA and Supporting Shane, a boy in Year 6 at St Joseph's who has Duchenne Muscular Dystrophy - has more recently been to Africa to compete in the Uganda Marathon.

Also this year Steve was specially invited to St James’s Palace in London to act as a guest speaker at a ceremony aimed at recognising the achievements of The Duke of Edinburgh’s Award, Gold Award, winners.

The Educate Awards, in partnership with Copyrite Systems and Ricoh, is now in its seventh year and is the largest education awards in the North West.

From inspiring teachers, superb support staff to innovative projects across the curriculum, the awards recognise the work of schools and colleges which are delivering outstanding education and helping students achieve their full potential.

Since launching in Liverpool in 2012, the awards has grown rapidly, now recognising schools and colleges right across the Liverpool City Region, Cheshire, Lancashire and Greater Manchester.

In total there are 21 award categories, including Teacher of the Year, Career Aspiration, School Support Star of the Year and Outstanding Commitment to Sport.

The winners will be announced at the annual awards ceremony, which takes place on Friday, November 16 at Liverpool Cathedral.