You are Here: Home » News » A night to remember!

A night to remember! 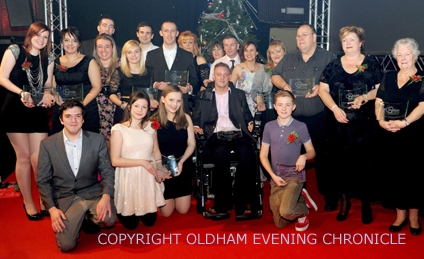 WINNERS ALL . . . the 11 category winners proudly show off their trophies at the finale of a memorable Pride in Oldham Awards 2011

Glitz and glamour filled the evening as the great and the good donned their smartest attire and joined over 400 people at the Queen Elizabeth Hall for the dazzling tenth anniversary awards.

Launched in 2002 by the Oldham Evening Chronicle after the riots which blackened the name of the borough the previous year, the annual awards caught the imagination of the public — and continue to do so.

And 33 finalists specially chosen by independent judges (and Chronicle readers in the case of the readers’ choice award) were invited to the Oscar-style ceremony, organised as a thank-you by the Oldham Chronicle and the sponsors, which started with a bucks fizz reception and music from Oasis Academy North Steel Band.

Guests enjoyed a three- course meal with entertainment from Oldham Coliseum actors and the spectacular Failsworth School Community Band before the lights were dimmed and it was time for Oldham’s premier awards ceremony to begin.

To mark the special tenth anniversary year, Oldham lad and former Chronicle reporter John Stapleton — for many years a top television presenter, took to the podium to host the presentation.

The red carpet was rolled out for people of all ages and from all walks of life but who had all gone above and beyond the call of duty to make the borough and the lives of its residents better.

The night was filled with excitement and emotion, with three finalists from each category taking to the stage and collecting their own framed front-page story before the winner was invited back to receive a stunning engraved glass trophy.

To make the occasion even more special, award winners over the past decade were invited to join in the moment by bringing the golden envelope with the winner’s name on stage.

Biggest cheers of the evening went to double-award winners Every Life Matters who scooped the Groups and Readers Choice categories and received standing ovations for their road safety campaign.

Representatives Becca Dale, Oldham Youth Mayor Chantel Birtwistle and Charlotte Kilroy, took to the stage twice and were visibly moved to have been recognised for the group’s amazing work promoting the road safety message.

Young winners during the night included Thai boxing champ Joe Tomlin (14) who also enjoyed the roar of approval after sprinting up the stairs to pick up his Sports Achievement win, and Oldham Hulme Grammar Year-10 pupils Jessica Entwistle and Saskia Edwards who took home the Schools award for their anti-bullying and peer mentor work.

In one of the toughest categories, inspirational sportsman and motivational speaker and actor Andy Walker, who was paralysed following an accident in 2006, took the Special Achievement award after pipping lifesavers Jade Whittle and Mark Barrow at the post.

Chronicle editor David Whaley, who spoke to thank sponsors and guests, said: “We wanted to do something special to mark the tenth anniversary and moving the event from a lunch to an evening dinner has meant many more people are able to come and witness what is a truly humbling occasion.”

The whole event ended with a sparkling firework display and disco and finalists and guests danced into the night to celebrate.

Tonight’s paper edition and the eChron have full reports and pictures from the glittering event, plus a 12 page special on the winners and their achievements.