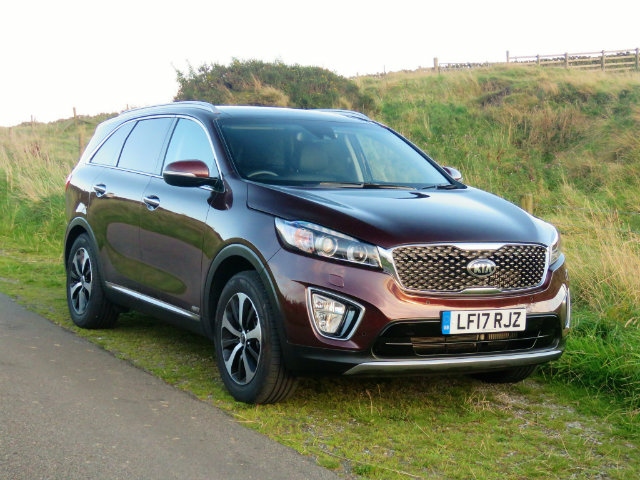 The Kia Sorento is the South Korean company’s flagship offering and this 3rd generation SUV is bigger and bolder than what has gone before, now offering 7-seats as standard across the range and an interior to rival the more up-market brands.

The exterior is much improved too – which, to be honest, isn’t that difficult as the old Sorento wasn’t blessed on the style front.

The new one is much more “pumped-up” in a masculine kinda way and has more of the traditional 4x4 chunkiness about it that was lacking before. The wide, tiger-nose grill has a 3D mesh that looks rather smart and the slimline, chrome headlight units are suitably swept back giving the front end a much more modern, sleeker look.

This new Sorrento looks large too – in fact it’s longer by 95mm with an 80mm increase in wheel base, while sitting lower by 15mm to emphasis its purposeful stance.

The wide skid-plates, both front and rear and two-tone side-body cladding add to the Sorento’s solid, practical appearance as does the wider, bolder rear. All in all the Sorento looks as though it means business.

If the exterior is much improved then the interior has taken a quantum-leap in style as Kia have gone down the minimalist route and given the Sorento an altogether more appealing cabin by simplifying the most common controls and grouping them together for ease of use.

There is increased headroom and legroom in all three rows of seats although that 3rd row is strictly for a couple of kids on longer journeys. Adults will be fine on short journeys but the “knees-up” position for taller passengers gets a little uncomfortable after a while.

A neat touch is that the rearmost passengers get their own heater controls too, while on all but the base model, the second row gets heated outermost seats – which the kids will love you for on those cold, wintry trips to school.

Kia have also kept the options minimalist for the Sorento – there is just the one engine choice, a 2.2 diesel unit giving you 197 bhp and a 0-60 time of 9 seconds. It is mated to a 6-speed manual transmission but for around an extra £1,700 you can choose a 6-speed auto box – but you will pay a penalty at the pumps as the auto box isn’t as efficient as the manual, which Kia claim can return up to 46.3mpg on the combined cycle. I managed nearer 37mpg on mixed roads, over seven days.

Impressively, they also come with permanent 4-wheel-drive making the Sorento one of the best value-for-money, large capacity SUVs out there that can actually find grip on all 4 corners.

If safety is a priority for you then you’ll also be impressed with the range of driver-aids that are available across the range. They include, Adaptive Cruise Control, Around View Monitoring, Cross Traffic Alert, Smart Park Assist which includes reverse and parallel departure functions, Lane Departure Warning with Blind Spot Detection and Adaptive Front Lighting.

It’s worth noting that you can order the car without the self-levelling suspension and save yourself £500.

The manual KX-3 I’ve been driving (£36,165) adds luxuries such as a Panoramic Sunroof with auto blind, Xenon headlights, LED rear lamps, Powered Driver’s Seat, engine stop/start and Smart Entry system, Smart Tailgate (opens automatically when you stand in front of it – so long as you have the key on you!), Ambient lighting, Infinity Sound System, 8in touchscreen, 7in TFT colour instrument display and Lane Departure Warning.

The Sorento KX-4 takes you into the £450 a year road tax bracket as it costs £41,450 and you are now getting into premium SUV territory – although you will probably have to sacrifice those 2 extra seats if you go upmarket.

I think the KX-3 offers more than enough premium feel for the money anyway. That panoramic sunroof is superb and I was impressed by the interior materials too which felt soft enough to impress but robust enough to take a battering from the family. The leather seats felt supportive and look great while the driving position was spot-on too with perhaps just the “over the shoulder” view being a little restricted by quite a wide B-pillar although the large wing mirrors help here.

Access to the 2 extra seats is quite easy, with just a pull of a lever low down on the middle seats which folds and slides those seats forward for access to the rear. Folding the 2 seats flat is also very easy from inside the hatch where there are straps on the back of each seat which just need a pull to flatten the seats and improve your load space from a modest 142 litres to 605 litres. For really large loads you can fold the middle row to give a whopping 1,662 litres.

Driving the Sorento can best be described as “uninspiring” but it is also predictable which is no bad thing in a family car. It’s certainly not an unpleasant drive – there is very little body roll even when trapping along on A-roads and the 2.2 diesel engine settles down to a quiet hum on the motorway very quickly.

The Sorento is more than comfortable enough for the longest of journeys and the only niggle would be the notchiness of the manual gearbox which annoys a little, especially around town.

Overall though, you’d be hard pressed to get such a large, 7-seater SUV with AWD for this type of money. Maybe the new Skoda Kodiaq will run it close, and while the Skoda feels a little more upmarket inside, you’ll be paying similar money for less space and when you take into account Kia’s excellent 7-year/100,000-mile warranty the decision may be made for you.