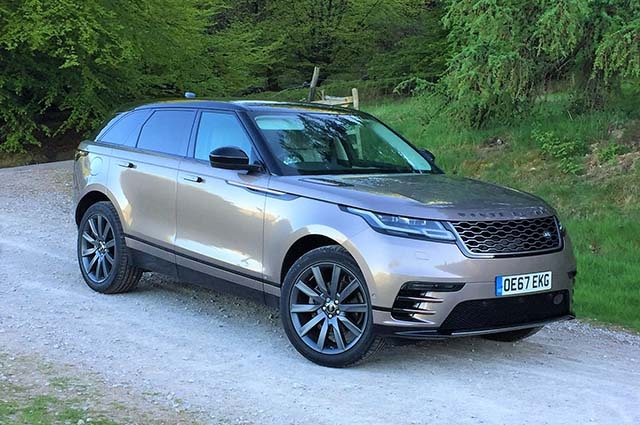 If the best advertisement for a car is simply for it to be seen then Land Rover should be selling the Velar by the truckload – it's simply stunning to behold.

Rakish, clean lines give the Velar a smooth look that is both intimidating and appealing in equal measures. However, it’s when you notice the detail – like the flush-fitting door handles that pop out when needed – you know the Velar is something special.

And while the Velar itself has a futuristic look about it, the name is steeped in Land Rover history as “Velar” was the secret production name given to the original Range Rover back in the 1960s and is derived from the Latin “velare”, meaning to veil or conceal.

You won’t be wanting to velare your Velar though; more likely you’ll be wanting to show it off as it is the most visually-striking Range Rover on offer – especially in the optional Kaikoura Stone Metallic paint finish (£725) that my press car came with.

The Range Rover Velar neatly fills the gap between the smaller Evoque and the larger Range Rover Sport, thus giving Land Rover customers an unrivalled choice when it comes to premium off-roaders and with the SUV market still climbing like a Saturn V rocket it’s also a very savvy move by Land Rover management.

But if you think the Velar is just a pretty face filling a gap in the line-up, then think again. The Velar is touted as the most driver-focused Range Rover yet and while the likes of the Porsche Macan may still have the edge when it comes to outright sportiness, there is no doubt that the Velar – especially in 3.0-litre V6 petrol guise – is satisfying to drive, but (and this is the crucial part) when it comes to off-road ability it literally leaves the competition behind.

No surprise then that all this ability and looks cost a pretty penny. The entry level Velar costs £44,735 and for that you’ll get the 180bhp 2.0 diesel, a very capable 4-wheel-drive system and an 8-speed automatic gearbox.

18in alloy wheels come fitted with all-season tyres for maximum year-round grip and there’s even a proper spare wheel – albeit a space-saver.

There is, of course, cruise control with a speed limiter and keyless entry along with Lane Keep Assist and Advanced Emergency Brake Assist. 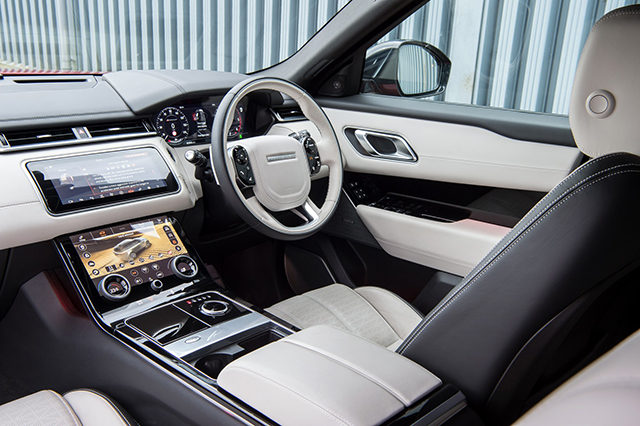 Specification Packs offer upgraded features and come in the form of S, SE and HSE. These packs add such things as leather upholstery (S and above), matrix LED headlights, more sophisticated infotainment with Sat Nav and more powerful speaker systems as well as various driver aids and conveniences.

Adding the HSE Spec Pack to your Velar will take the price to £58,785.

However, most people will opt for the only other trim level – the R-Dynamic (from £47,155) - which has a purposeful stance with Burnished Copper bumper accents, bonnet vents and side vents adding greatly to its sophisticated look and allure. The bonnet badge, tailgate script and grille are finished in Shadow Atlas whilst inside, the vehicle features Satin Chrome gearshift paddles and Bright metal pedals to enhance the sportier feel.

Engine options across the range include 4 diesels and 2 petrol units. The 2.0-litre diesels have outputs of either 180bhp or 240bhp while the 3.0-litre V6 diesels have 275bhp or 300bhp. The 300hp version will hit 60mph from standstill in just 6.3 seconds.

The two petrol options are both 2.0-litre, 4-cylinder Ingenium engines with either 250bhp or 300bhp. The more powerful engine will whisk you to 60mph in 5.9 seconds.

I’ve been driving the Velar HSE R-Dynamic D240 with an eye-watering price tag of £64,620 although my model has some optional extras which brought the price to £66,580.

Okay, it’s a lot of money for a mid-sized SUV but after admiring it from the outside and then climbing inside you’ll realize it’s money well-spent as the interior is just as satisfying as the exterior.

The Light Oyster/Ebony trim is beautifully finished with a Union Flag motif repeated in the perforation of the 20-way adjustable, heated/cooled leather seats and the fixed panoramic sunroof allows light to flood in – although the pano roof is a £1,115 option.

The large dual-screen setup is eye-catching with the main screen slowly tilting automatically out of the dash when you switch on.

The second Touch Pro screen sits further down and controls such things as climate and driving modes. Both screens look sharp and together are an impressive feature of the interior but it’s a pity you have take your eyes off the road to touch the climate icons if you need to change settings on the move. Much better to have physical, tactile knobs which easily fall to hand with minimal distraction.

There is also a third hi-res screen in place of the traditional main dials which is very configurable – much like Audi’s Virtual Cockpit setup – which I found to be very clear and easy to use.

It’s a shame there is no Apple CarPlay or Android Auto available as Land Rovers equivalent – InControl – is pretty abysmal. No matter, the sound itself from the 16-speaker, 825W Meridian system was superb and the Sat Nav is easy to navigate around.

Needless to say, you can cover some miles in the Velar and feel fresh as a daisy at the end of your journey although rear adult passengers may be disappointed with the amount of knee-room available – which is a surprise for such a well-proportioned SUV. 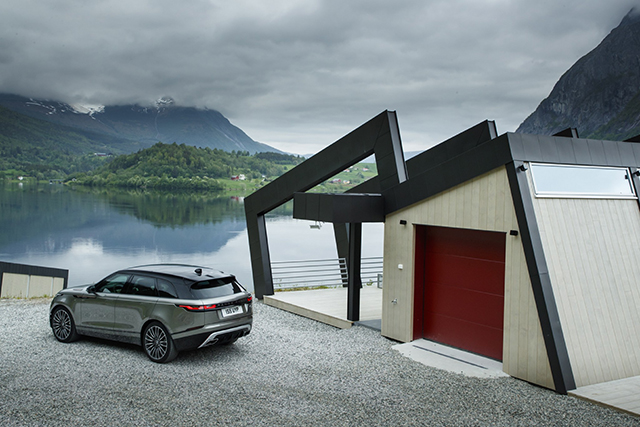 Headroom, however, is plentiful in the rear for adults and 3 children should be fine on the longest of journeys and they’ll thank you for the USB charging points back there . . .

Boot space at 673 litres is generous and more than the BMW X6 and with the 40/20/40 split-folding rear seats down you should be able to transport larger items with ease.

So, just how sporty is the Velar to drive? Well, it’s a Range Rover so comfort still triumphs over outright pace and chuckability but keen drivers won’t be disappointed.

My D240 model makes 369lb ft of torque which is impressive and more than enough for all towing needs and means quick overtakes are a doddle.

Noise suppression is excellent and I found the Velar to be a more serene drive than the impressive Jaguar F-Pace, which is already a very quiet SUV.

Predominantly rear-wheel driven the Velar’s gearbox and clutch will call on the front wheels when needed and this not only means a well-handling car but with real-life MPG figures of around 48, it’s not too thirsty either.

Off-road the Velar is way more capable than rivals – in fact it’s not far off the pace of a full-sized Range Rover and with the likes of Terrain Response as standard you won’t be getting stuck in any low-traction situations.

However, in every-day situations the Velar is a delight to drive with forgiving suspension that never jolts – although the optional Air Suspension probably helped here, as does selecting “Comfort Mode” from the Adaptive Dynamics array.

Body-roll is so well controlled you’re tempted to leave it in Comfort Mode even on twisty A-roads although Dynamic Mode does allow for quicker exits from corners – with torque-vectoring also helping here.

So, the Velar definitely feels more of a “Driver’s Car” than the taller Range Rover Sport and although (on the face of it) looks quite expensive, you are getting a top-quality product with an enormous amount of technology and real-world ability. Personally, I would be sold on those looks alone and the fact that the Velar is an exclusive SUV that will probably remain so. A “hidden” gem indeed.