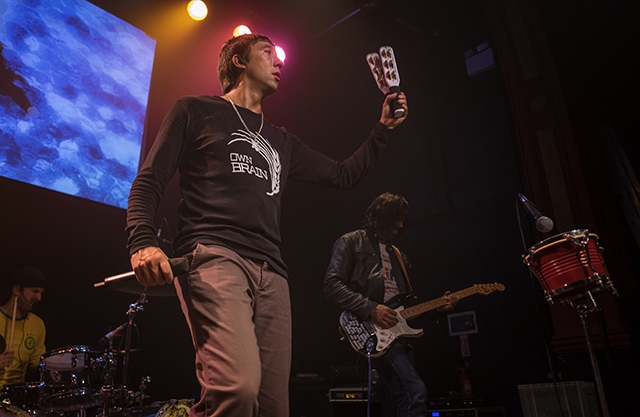 The Clone Roses head to Uppermill Civic Hall on July 7

Live music fanatics are in for a real treat on Saturday, July 7, when PopUp Promotions bring two amazing bands to its latest show at Uppermill Civic Hall.

The Clone Roses – the UK’s most popular Stone Roses tribute act – are in town, joined by the hotly-tipped Callow Youth, and thanks to our friends at PopUp you can be there for FREE in our latest top Chronicle music competition.

We’ve got FIVE pairs of tickets to give away – entry details below.

The Stone Roses are without doubt one of the most important British bands and their music has influenced and inspired many artists.

But with the Roses appearing to have once again called it a day, there is only one
option to hear those songs played with the same passion and energy as the real
thing.

The Clone Roses are the most revered Roses tribute act out there on the live scene today.

The attention to detail is second to none, with the band acquiring the same clothing, instruments and usually play the same set as the Roses themselves.

The band have played Isle of Wight Festival, Shiiine On Weekender, and “A Tribute to Manchester”, headlining to over 2,500 at Manchester Academy 1, and to 1,700 people at Ulster Hall in Belfast.

They have also recently toured the o2 Academy music venues.

The band – front-man Alfie Turner (17), guitarist Tom Hilton (17), bassist Nathan Wrigley (17) and drummer Connor Wilkinson (18) - formed just over a year ago while the boys were still at high school.

They got stuck into their first recording studio session in January, 2018, at Vibe Studios in Manchester, putting down five tracks in a one day/eight-hour session with Vibe’s ‘in house’ producer, Dean Glover.

‘Into The Sun’  was released via iTunes, Spotify and on YouTube  on March 25 and was well received.

‘Rough’ was released digitally through the same channels to keep up the momentum on April 11, and this also tied in nicely with the anniversary of the band’s first rehearsal.

Most recently, ‘Long Way Back’ was released through the same channels on May 2.

Callow Youth played their first couple of gigs in May and their third on June 2 at Fac251, the old Factory Records HQ in Manchester.

They have further dates coming up through June, July, August and September.

Check out Callow Youth’s dedicated Facebook page and keep up with all the latest gig and recording news.

Tickets for July 7 at Uppermill Civic Hall - which will also see a top indie DJ banging out tons of Madchester and Britpop tunes - cost £15 each, but to be in with a chance of winning one of five FREE pairs of tickets in our terrific competition, simply email your name and daytime contact details to: simon@oldham-chronicle.co.uk

The closing date for entries is Friday, June 22, at 1pm. Good luck!

To make sure you don’t miss out, book your tickets via: www.popupuppermill.co.uk, or via the Ticketlight website.