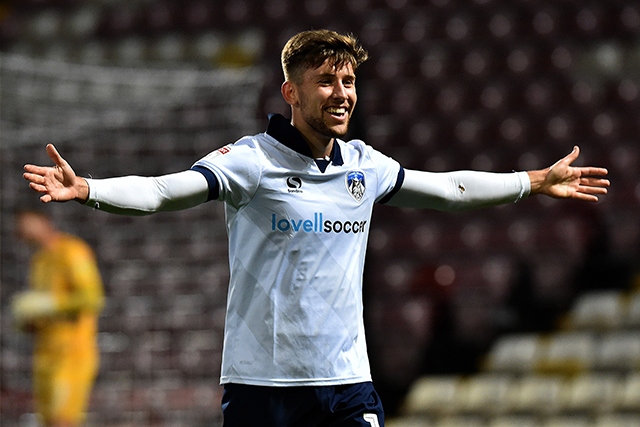 Striker Callum Lang reckons there’s plenty more to come from both him and Athletic this season.

Lang, aged 20, signed for Athletic on the eve of the current League Two campaign, on loan from Championship side Wigan.

Much is expected of the talented youngster, and he is now off the mark on the goalscoring front after notching in Athletic’s thumping 4-1 midweek Checkatrade Trophy success at League One Bradford.

“Every member of staff I can’t fault whatsoever.

“Literally, on the first day I arrived, everyone was so welcoming.

“It took me a couple of games to actually break into the team, and I am still learning a bit playing on the left side, but as the games go on I can feel myself getting stronger.

“I’ve had a good run of games now and I’m really settling in.

“It’s still early doors of course, but the whole squad has got very high standards and we all know there’s a lot more to come yet.

“We have got another couple of gears to go through yet.

“It does feel like the team is getting better every week, and that goes for myself too.

“There’s healthy competition in the squad, and all good sides need that.

“If people want your shirt and you want theirs, that’s fine as far as I am concerned.

“It’s working well so far at Oldham, and we’re all getting on.”

Away from Boundary Park, Lang is a lifelong fan of Everton, though the ambitious hit-man admits that when he gets the occasional opportunity to go and watch the real top-flight stars in action, he just wants to be out there with them.

Maybe he will realise his Premier League dream one day?

“I used to go to all the Everton games with my Dad,” said Callum.

“Once I got my scholarship at Wigan, though, there wasn’t as much time to go.

“I just enjoy going to watch any games to be honest – even teams I don’t necessarily support.

“I went to watch Liverpool – PSG recently, mainly because I wanted to see PSG and Neymar, one of the best players in the world of course.

“I’ve been to Wembley, Goodison Park and Anfield, and there’s nothing like the big-game atmosphere at hose kind of places.

“I always think ‘I just wish I was on the pitch there with all the other players’.

“It does make me jealous, wanting to be part of one of those really big games.

“When I’m watching from the stand I just want to lace up my boots and get on there.”

This summer’s World Cup tournament in Russia clearly left a huge impression too.

Asked about England’s thrilling run under Gareth Southgate, Callum added: “I was really impressed with England and I enjoyed watching them – I just thought they had a right go.

“They had a great run to the last four before going out to a great side.

“There was no complaints from me. I enjoyed the way they played, they were exciting to watch and if I’m honest, the World Cup made my summer this year.”

Meanwhile, two Athletic players have been nominated for the PFA Fans' Player of the Month award for September.

Striker Sam Surridge and defender George Edmundson went head-to-head in the vote - which closed at 8am this morning (Friday) - against four other Sky Bet League Two players.

The Latics pair, who both had stand-out months, are up against Colchester United's Luke Norris, Lincoln City's Jason Shackell and Tom Pett as well as Bury's Byron Moore.