You are Here: Home » News » Latics » Latics boss admits they need the points ahead of Scunthorpe United match 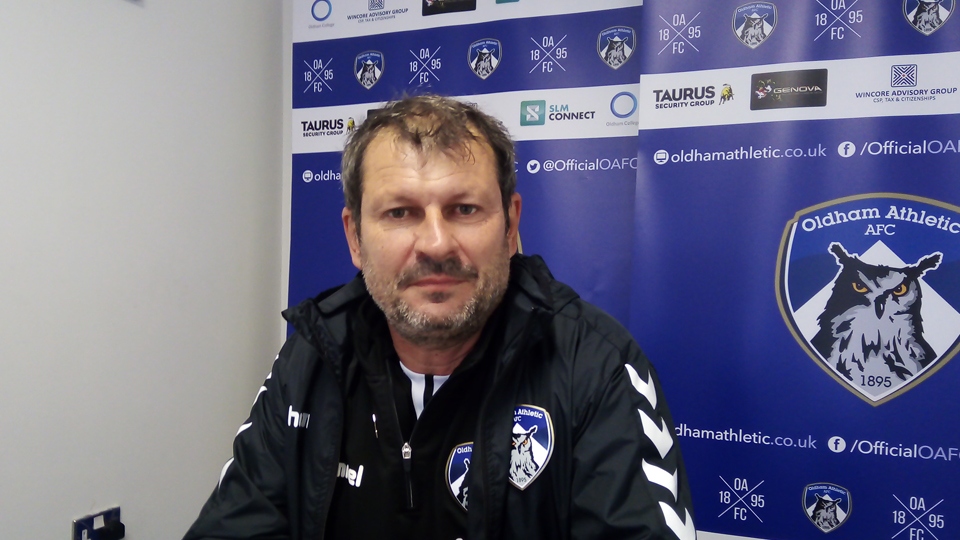 Laurent Banide is enjoying his job as manager of Oldham Athletic, but he admits it's 'not easy'.

Now three months into his tenure at Boundary Park having taken over from the now-departed former caretaker boss Pete Wild in the summer, Frenchman Banide is still getting to grips with his first assignment in the English Football League.

Latics currently sit in 20th place in the Sky Bet League table having won one and drawn three of their eight games so far this term.

Encouragingly, though, Banide has been given the backing of the Latics board.

"The Board are fully behind Laurent and we look forward to the rest of the season," read a club statement issued before the weekend.

The lengthy statement also updated on numerous other issues around the club.

Asked about the crucial board backing, Banide said: "I try to give my best all the time.

"The situation here is complicated. It's tough to start with a lot of new players.

"It's not easy to build something, but we're all working well and we believe in what we do.

"I have confidence, and I'm happy here. I'm happy working with my ideas of football.

"I believe in all the players we have here.

"It is impossible to build a big team straight away, but we're doing what we think is right."

Latics' next League Two task comes tomorrow night when they head to Glanford Park to take on a Scunthorpe United side who have also endured an inconsistent start to the campaign.

Banide knows it's a crunch clash for his team and it's supporters.

He added, "We all know the difficulties of this league.

"We need the points, everybody knows that.

"Training has been good this week, though."

Banide is now over the disappointment of Saturday's result, when his side threw away a two-goal lead late on in a 2-2 home draw against Grimsby Town.

The Latics boss said,"Of course I was frustrated with the result.

"We have to be careful in those last 10 minutes. We must concentrate more and be more professional.

"I'm optimistic, but I also know football is about results.

"It's important to see the same spirit we've been showing, but we sometimes lose concentration very fast.

"It's a problem, but we'll keep working on that."

Latics will have an injury-free squad available for tomorrow's trip to Scunthorpe.