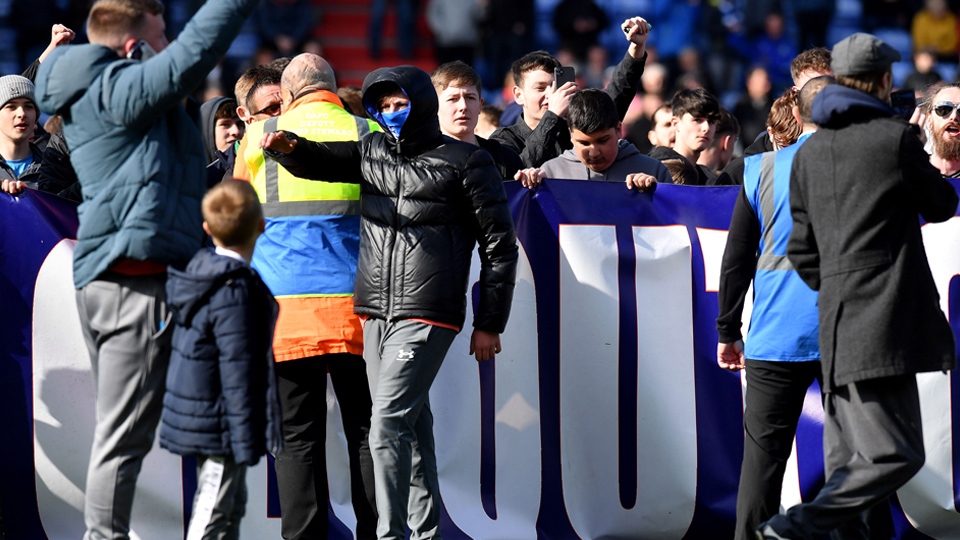 Flashback to when fans invaded the Boundary Park pitch during the Salford City defeat, a result which condemned Latics to relegation from the Football League

Latics have announced that they have begun investigating the pitch invasion which halted their recent penultimate home game of the League Two season against Salford City.

Late in the second half of the April 23 clash, with Latics heading towards non-league football as Barrow and Stevenage led elsewhere, large sections of the crowd ran onto the pitch and unveiled a “Get out of our club” banner directed at owner Abdallah Lemsagam.

Goals from Matt Smith and Brandon Thomas-Asante either side of a David Keillor-Dunn penalty eventually handed Salford a 2-1 relegation-sealing victory.

This morning (Friday) a Latics club statement read: "The process has begun to identify those fans that encroached onto the pitch during the Salford City game.

"The Club is working in close co-operation with Greater Manchester Police in these respects.

"The first group of identified fans will receive letters notifying them of a Club ban of three years.

"This action does not preclude the ability of the Police to prosecute those who committed the offence of encroachment.

"In future, the Club will operate a zero-tolerance approach to all breaches of the law.

"Those receiving Club bans should be aware that there is no appeal process in place."

Perhaps unsurprisingly, there has been stunned reactions from Latics supporters on social media.

One posted: "Maybe start concentrating on important club matters like 'the squad'.

"You obviously find this vendetta against the fans a much more pressing issue. Get gone."

Another added: "I wasn't anywhere near Boundary Park that day but this is just further proof that the club hates its own fans!

"The whole 'business' of football has become so corrupt I just don't care about it anymore.

"It's the board who need to be brought to justice!"

Another said: "The 'Club' are the supporters, not the faceless board who are acting like little Putins.

"You do not listen to the supporters what else could they do to be heard.

"This was a legitimate protest.

"You have lost supporters who did not go on the pitch because of this statement."