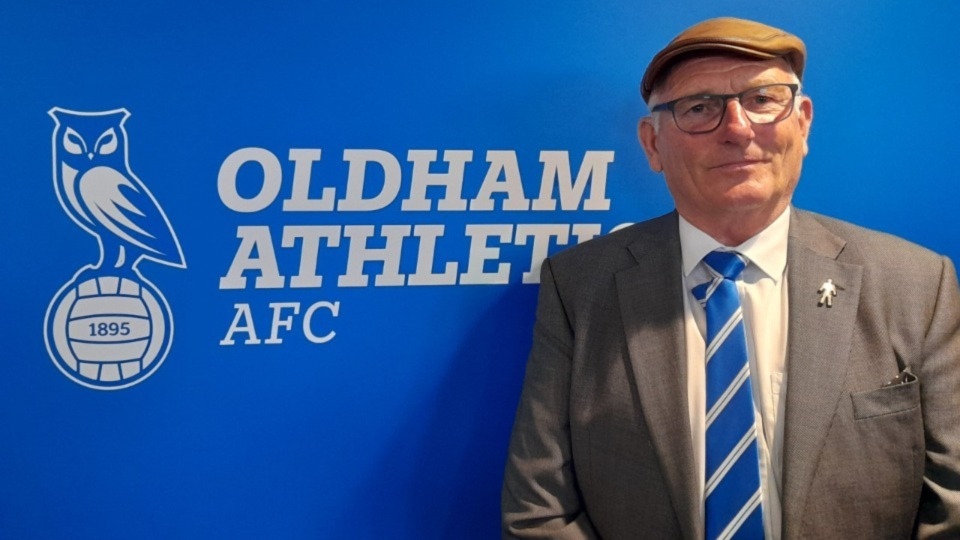 New Latics chairman Frank Rothwell has urged the club's fans to pack out Boundary Park for the first home game of the National League season on Saturday, August 13.

A figurehead for the new Rothwell family ownership, Oldham business leader Frank spoke emotionally and passionately about today's earlier takeover announcement, and has now handed over the gauntlet to the fans to make their mark in memorable style by packing out the famous old stadium in just over two weeks time.

During the at-times chaotic, yet joyous press conference in the Joe Royle stand announcing the takeover deal, Rothwell said: "I want to fill place for the game against Dorking now.

"Let's all get behind John and the team.

"Let's have brass bands here, dancing girls, families, and we should create a fantastic atmosphere and celebrate."

That will be music to long-suffering Latics fans' ears, with Rothwell and his enthusiastic Oldham team clearly determined to fire Latics back into the limelight and back to becoming a club which supporters can be proud of once again.

With the cheers and songs from fans ringing out from outside the stadium in what was an almost surreal scenario, Rothwell said: "I've always had a strong love and passion for Oldham.

"Having a successful football club can make such a difference.

"It can impact the lives of so many loccal people.

"We're here now, and this is the start of a new era - the only way is up from here.

"We want to attract Oldhamers back to this great club, and so they can all see it in a much different light now.

"Of course we need to steady things down, but why can't we aim to get back to League One again, or even the Championship.

"It'll be hard work, but we want to have fun too.

"Let's get the people of Oldham proud of their football team again, whether they're talking down at the chippy, in the works canteen, at school, wherever.

"Let's get this club out of freefall and back on an even keel.

"It's about leaving the past behind us now."

Along with Rothwell, his daughter Su, Darren Royle and legal adviser Peter Norbury as board members who spoke at the press conference, Latics legend Joe Royle was also sat at the top table.

He was clearly relishing the prospect of being involved at Boundary Park again, and is backing team boss John Sheridan to succeed in the first season out of the EFL for over a century.

Royle snr said: "The National League is a hard division, and it won't be easy to get out of.

"John knows his stuff, though. He's been there and done it.

"With the backing of these great supporters he we can be up there challenging next season."

He said tonight: "After years of understandable frustration and angst amongst Latics fans today should mark a turning point in the journey of our town’s football club.

"It’s been confirmed that Frank Rothwell is the new Chairman of Oldham Athletic, and remember after rowing solo across the Atlantic at 70 years old Frank is no stranger to a challenge!

"Frank and the rest of the Rothwell family are fantastic ambassadors for Oldham and I’m sure Latics fans are delighted that Joe and Darren Royle are back involved at the club.

"I look forward to sitting down with Frank in the next few weeks to discuss the plans for Latics and Boundary Park and what support I can add as the Member of Parliament.

A strong sentiment indeed then, but as for previous owner Lemsagam, his 'dream' of becoming 'president' of a club four-and-a-half years ago have undoubtedly turned into a nightmare.

Memories of his tenure will swiftly be cast aside.

After acquiring Latics, he controversially appointed his brother, Mohamed, as sporting director, and has employed numerous different team managers.

Last season, when Latics became the first former Premier League team to drop out of the EFL, was marked by pitch invasions, sit-ins on the centre circle, tennis balls thrown from the stands and fans turning up to the ground dressed as clowns.

A coffin emblazoned with the words “RIP OAFC” was placed outside the entrance to the main stand ahead of Oldham’s game against Hartlepool in September, and it went downhill from there.

To Latics fans' delight, he first hinted at selling up six months ago, but finally, now, after a disastrous spell in charge, he leaves the club with fans at last looking postively to the future.

Let's hope Frank Rothwell's hopes and aspirations for Latics come true and the team soon starts rising back up the divisions once again.