You are Here: Home » News » Roughyeds » Oldham Joy as Phil signs up again 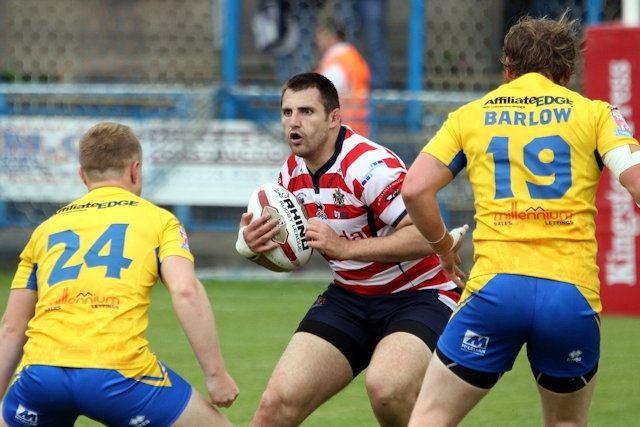 Phil Joy has signed up for another year at Oldham

Some ​things are constant . . . like Phil Joy’s allegiance to his home-town club.

The 27-year-old front-row man has signed a new one-year deal and is now looking forward to his NINTH season at the club after starting off in the reserves in 2011 and making a first-team spot his own in 2013.

He made his debut against Gateshead Thunder near the end of the 2012 season and has since racked up 133 appearances in which he has scored 22 tries.

Had he not suffered a dislocated left shoulder in the third game of the ill-fated 2017 Championship season he would have passed the 150-game milestone by now.

He was restricted to four games that year, but proved in League 1 last season, when he scored eight tries in 27 games, that he is now fully fit after a major reconstruction of his shoulder.

Compare Joy’s eight with what the other props scored and the local lad, sponsored by the Past Players’ Association, chalked up as many as did Adam Neal, Jack Spencer, Ben Davies and Luke Nelmes put together.

There will be a new look to next season’s pack, given that Langtree (Hull FC), Adam Jones (Swinton) and Kenny Hughes (North Wales Crusaders) are moving to other clubs and Neal and Briscoe are retiring.

The flip side to that is that seven forwards have again committed to Roughyeds for next year (Gareth Owen, Jack Spencer, Ben Davies, Matty Wilkinson, Luke Nelmes, Liam Bent and Joy) while new boy Ben Calland has been recruited to bolster the second-row.

Said Joy: “As I see it, the departures merely give opportunities for others to step up, and I’m sure they will do.

“We’ve still got a few staying from last year, to form the core of the side, and there are new lads coming in so its all very interesting and very positive.

“On a personal note, I wasn’t going to go anywhere because I love playing for Oldham .

“One of the biggest factors was my desire to be in a side that finishes what we started last season and finally takes the club back up to the Championship.

“I’m no different to the other lads who have re-signed in that objective, as they have already alluded to.”

Joy, who recently announced his engagement to Laura, a local girl, said he was looking forward to the start of pre-season training after being restricted in what he could do this time last year after his shoulder operation.

He added: “It’s all good now, smashing, but I had to be careful what I did during the early part of last season and I feel sure I’ll benefit from a no-holds-barred pre-season this time.”

"He's a good footballer with the pace and skills to do well for us," said Roughyeds head coach Scott Naylor.

He scored 14 tries in 17 games for Doncaster last season, splitting his appearances between wing and centre.

Added Naylor: "If he comes with the right attitude and the desire to wear the shirt with pride, like the rest of the lads, he will be a big part of our team."