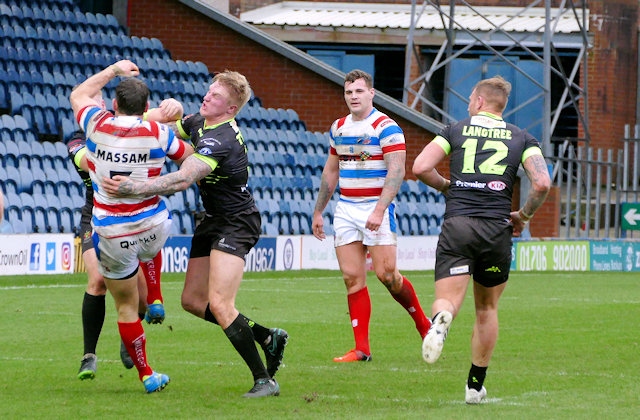 Danny Bridge (centre) when he was playing for Hornets

The big second-row forward, suspended last July when he pleaded guilty to a grade F charge arising from contact with referee Cameron Worsley in a match at Keighley Cougars, has signed a new one-year deal to stay with the Roughyeds.

He said: "The club stuck by me when I was at an all-time low so all things being equal I was never going to go anywhere else.

"I made a big mistake in the heat of the moment and let down the club, the lads, the coaching staff and the fans so my intention was always to get back into the side as quickly as possible to make up for lost time and to put the awful events of the past few months behind me.

"I'll miss the first couple of months of the season, but I can't wait to get back."

Bridge, 25, younger brother of former Bradford and Warrington centre star Chris Bridge, had scored ten tries in 20 appearances and was in great form until he mistakenly thought the referee was a Keighley player in that ill-fated Roughyeds performance at Cougar Park.

He was fined £75 and banned for nine months, after which the club issued a statement in which chairman, coach and player apologised publicly and said they accepted the disciplinary procedure and ultimate verdict.

Bridge, who has never been sent off in his entire career, said on social media he thought he had made contact with an opponent.

"I made a massive mistake," he added. "I was ready to accept whatever punishment I received."

Coach Scott Naylor said he was thrilled to re-sign Bridge who, until his ban, formed a lethal second-row partnership with Danny Langtree, who has now moved on to join Hull FC.

He added: "After losing 'Langers' it was absolutely imperative that we kept hold of Danny Bridge.

"In the first half of the season he was right up there with 'Langers' at the top of the Roughyeds tree.

"It was a huge loss when he was banned.

"I have no doubt whatsoever that he will again be one of our best players in 2019.

"He's top quality - and to keep hold of him is a massive signing for club, squad and team."