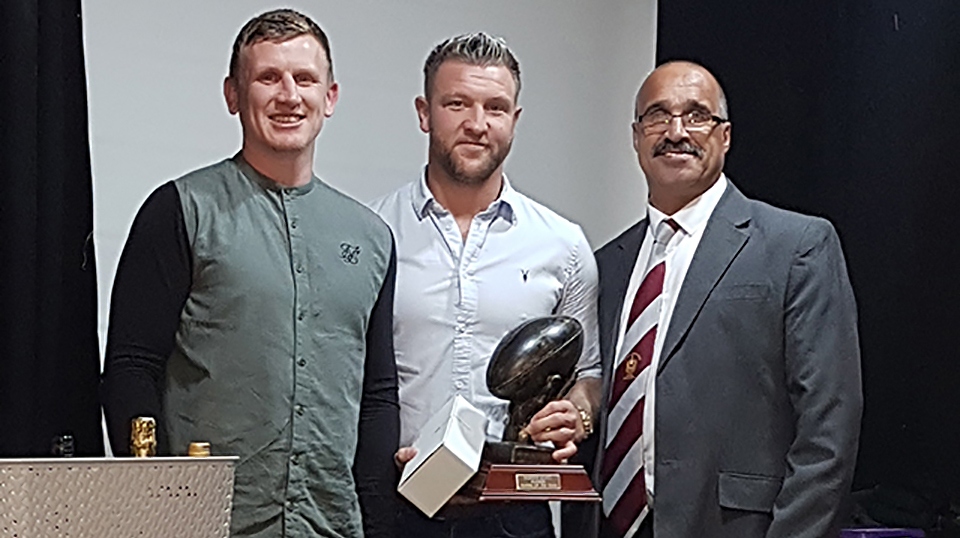 Ritchie Hawkard (centre) won two awards, voted top gun by his fellow players and by the coach. He's flanked by club captain Gareth Owen and Joe Warburton of the Past Players, who sponsored the players' award

The event was organised by Anne Kearns, a member of the club's volunteer management committee, whose closing remarks included an emotional send-off to departing coach Scott Naylor and his No 2, Peter Carey.

Referring to the promotion-clinching run of 11 wins from the last 12 games, Anne said: "It was a wonderful end to the year.

"Scott had belief in the players. He coached, pushed, nurtured and cared for the whole squad and boy, oh boy, did it pay off."

There followed a standing ovation to the squad and to Naylor and Carey, who are leaving after long associations; Naylor after seven seasons, Carey after four.

Added Anne: "We can't thank Scott and Peter enough. At times Peter was the voice of calm. We wish them both good luck for the future."

Full-back Ritchie Hawkyard, who is leaving to stay in Betfred League 1 with his former club Keighley Cougars, picked up two individual awards.

ORSA. the supporters assciation, sponsored the fans' award, won for the second year in a row by tackling-machine Liam Bent.

Chris Williams, a masseur in the match-day backroom team, was named Clubman of the Year, while 71-year-old Peter Gray, the club's official video operator, was 'Unsung Hero'.