You are Here: Home » News » Roughyeds » No 18 jersey dedicated to fans

No 18 jersey dedicated to fans 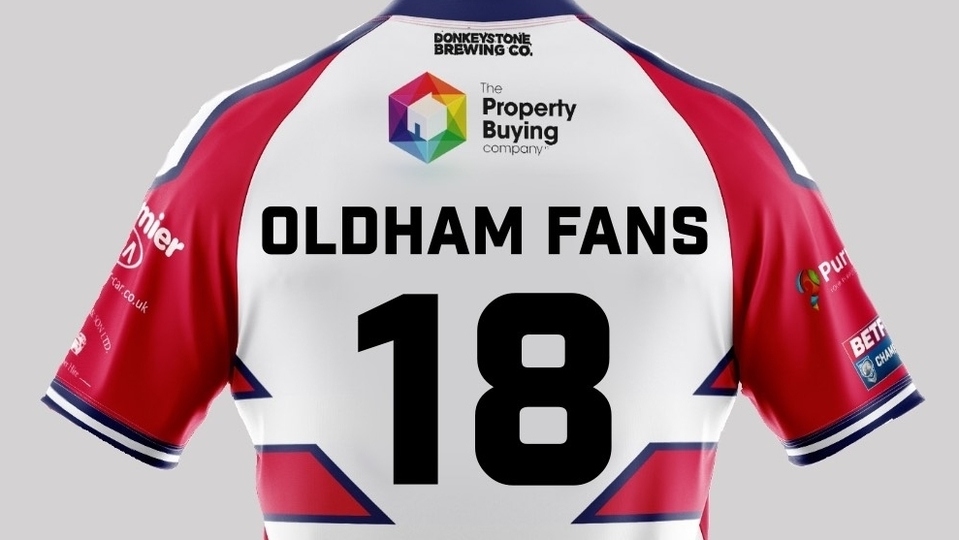 Charged with handing out numbered squad jerseys, coach Matt Diskin backed chairman Chris Hamilton's idea that No.18 should be allocated to fans

Oldham Rugby League Club's loud and proud fans will be their 18th man this year - and they'll have a Roughyeds squad shirt to prove it!

Charged with handing out numbered squad jerseys, coach Matt Diskin backed chairman Chris Hamilton's idea that No.18 should be allocated to fans.

Diskin will announce his squad numbers imminently - and shirt No 18 will be dedicated to the men, women, boys and girls whose devotion and backing helps to keep the club in business in these times of unprecedented financial hardship.

For the first time since squad numbers were introduced into Rugby League more than 20 years ago, a numbered Oldham jersey will 'belong' outside the dressing room.

Said the chairman: "It's a way of showing our gratitude to everyone who has helped us - season-ticket holders, sponsors, other fans, all those who bought our special NHS and Joseph Platt shirts, those who have made donations, gone out of their way to keep lottery money coming in or bought replica jerseys. I could go on.

"A big thank-you from the club and from me personally.

"Ahead of a new season, with all its uncertainties and with no income through the turnstiles in the first few weeks at least, it's good to know fans are behind us .

"All we ask is that they continue to do what they've been doing.

"It will be even tougher in the next few weeks because we will now have more expense - players, broadcasting, ground rental etc - but still with nothing coming in."

Said Diskin; "We've had so much help from so many people, I can only say it's been phenomenal.

"It has enabled us to put together a good squad.

"It's been humbling and I can't tell you how much we appreciate it.

"I'm privileged to present the No 18 jersey to supporters in recognition of all they do for the club."

This year's replica kit, home and away, is itself a throwback to 1990 and to days and games which fans still talk about more than 30 years later.

The popularity of team and players back then, when Aussie blond boy John Cogger was king, is reflected in brisk sales since the 2021 away kit was launched a few days ago.

Replicas and other merchandise can be ordered on line via the club website or by phone during normal office hours to 07904 898 177 with payment by card.

Healthy interest is also being shown in acquiring access to the streaming of games on Our League, featuring Roughyeds in action against Halifax on Saturday, March 13 (friendly) and Barrow Raiders on Saturday, March 20 in the first round of the Challenge Cup.