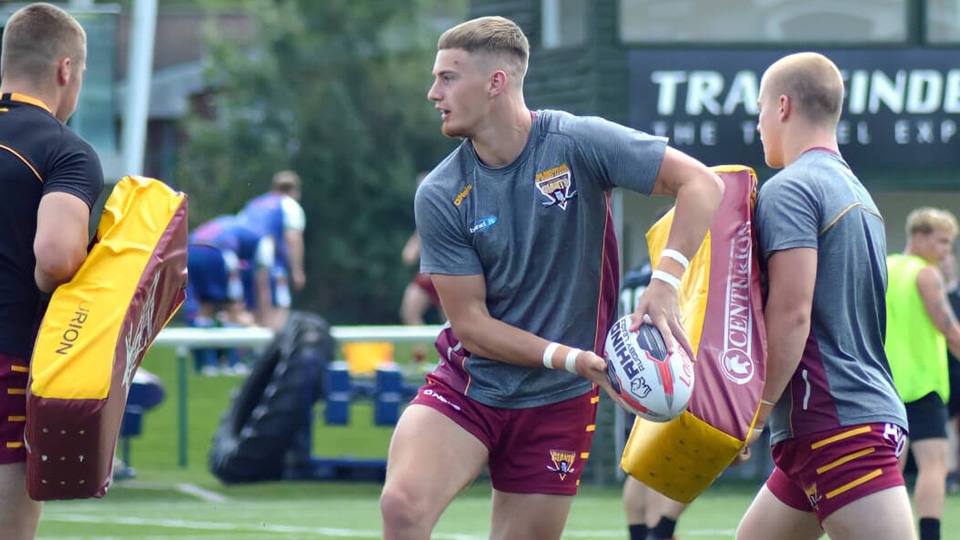 Oldham boy Callum Cameron, once of Waterhead, then of Castleford Tigers scholarship, then of Huddersfield Giants' academy and reserves, has signed a one-year Roughyeds' contract that links him up with his best pal and former team mate at Waterhead and Castleford, Brad Jinks.

"It's great to follow Brad to Oldham RL Club and all the more so because he and I are best pals and my Dad and I have supported Oldham for years," said Callum, a 20-years-old back-row forward, who was thrilled to sign for the home-town club he has been watching since he was a small boy.

"I haven't been able to go to as many games as I would have liked in more recent times because of my own rugby commitments, but I went a few times in the season that's just finished and I love to watch them as often as I can."

Callum lives close to the Waterhead ground where he first cut his teeth on rugby at the age of five or six.

He and Jinks were among four Peach Road lads who were scouted and taken to Castleford Tigers where he played for one year at scholarship level before moving nearer to home at Huddersfield Giants. He was three years at Huddersfield where, in the latter part of his stay, he trained full time with the first team and got into the reserves.

"It's been a similar career path to the one taken by Jinksey at Castleford," added Callum who, since leaving a full-time environment at Huddersfield, has landed an apprenticeship in plumbing and heating engineering.

Describing his Dad, Colin, as a "massive" Roughyeds supporter, he said he was excited at the prospect of combining rugby with a full-time career in plumbing and heating and playing alongside his best mate.

"That's got to count for a lot," he concluded. "I can't wait to get started."

New-look Roughyeds, with Stuart Littler brought in as head coach on a two-year agreement, and with John Roddy joining club management as vice-chairman, have now revealed six players on contract for 2022 -- Joe Hartley, Ben Holcroft, Brad Jinks, Luke Nelmes, Tommy Brierley and Callum Cameron, three of whom are Oldham-born.

On the flip side, Swinton Lions have confirmed the signing of goalkicking Dan Abram, who played for Roughyeds in 20 of their 23 games in 2021, most of them at full-back but three at half-back and two on the wing.

Don't forget to act on vice-chairman John Roddy's Fan Survey ahead of a Fans' Forum, to be held soon (full details on the club website).

And by going on there, you can still buy tickets at £15, including potato-pie supper, for the club's Awards Night at the Oldham Event Centre, Boundary Park this coming Saturday (7pm for 7.30pm).